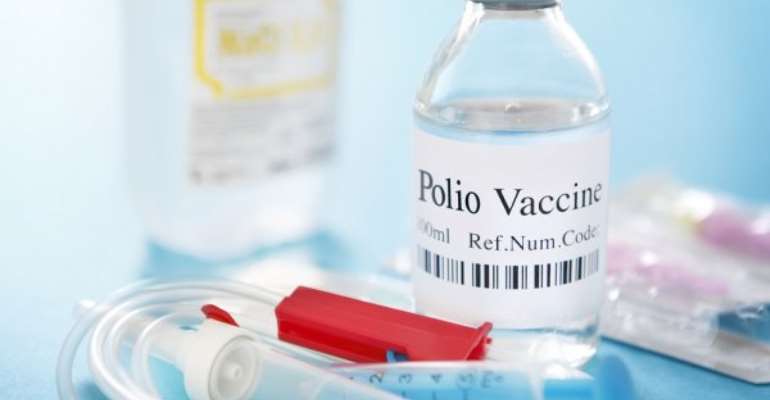 The vaccination is to raise the children's immunity against the non-wild polio virus.

Under each round, more than 4.56million children in 179 districts across the eight regions would be immunized against the Circulating Vaccine Derived Polio Virus type 2 (cVDPV2).

In March this year, a total of 273,859 children in 15 districts were immunized against the virus.

Dr Patrick Kuma-Aboagye, the GHS Director-General, said at a press briefing in Accra that the immunization was part of efforts to protect the population against the outbreak of non-wild polio which started in the country last year.

In August 2019, Ghana reported a confirmed case of Vaccine-derived polio virus type two in a two-year-old child from Andonyama, a sub-district of Cherponi, in the Northern Region.

So far, 31 floppy paralysis cases of cVDPV2 have been confirmed in eleven out of the 16 Regions.

Dr Kuma–Aboagye said health workers were engaged and trained to undertake the exercise with strict adherence to the COVID-19 prevention protocols.

He said the immunization officers would move from house-to-house in the selected districts to administer the Oral Polio Vaccine (OPV) to the children to help stop the transmission.

The GHS Director-General assured the public that the vaccine is safe and effective in protecting children from the disabling and potentially deadly disease.

He encouraged all parents and caregivers to ensure that children under five years are vaccinated during the exercise.

Dr Kwame Amponsah-Achiano, the Programme Manager of the Extended Programme on Immunization (EPI), said the virus could be stopped with two to three rounds of supplementary vaccination.

"If the population is fully immunized against polio, it will be protected against both wild and non-wild polio as there will be no chance for circulating vaccine-derived poliovirus to emerge," he said.

He said the OPV is safe and effective at protecting children against lifelong paralysis.

Ghana is currently challenged with non-wild type circulating vaccine-derived polio virus outbreaks in parts of the country linked to an outbreak in the West African Sub-region.

Dr Amponsah-Achiano said the outbreak was because of low vaccination coverage over long periods in part of the world and poor sanitation.

He said the GHS and partners would continue strengthening routine immunization with both oral and injectable polio vaccine coverage, to enhance coverage.

In August this year, the African Regional Certification Commission certified the World Health Organisation African Region (WHO) as polio free after four years without a case.

Dr Amponsah-Achiano said although African has been certified a wind of non-wild type 2 virus is blowing across the sub-region and polio is still a threat.