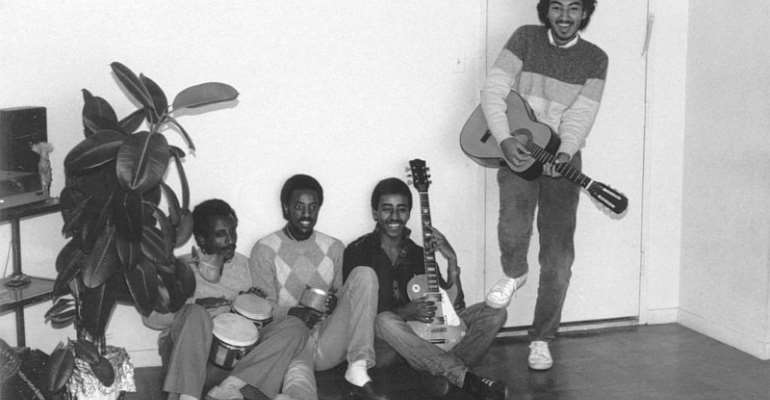 Admas, a quartet of young Ethiopian musicians living in exile in Washington DC, had a ball recording an album of synth-heavy, funked up versions of Ethiopian classics. 'Sons of Ethiopia ' was soon forgotten but became cult among fans of ethiojazz. Now reissued by Frederiksberg Records, it reflects happier times from a generation that "just escaped" the worst of the Derg.

Some records are far more than the sum of their parts, and Sons of Ethiopia is one such.

The seven tracks were recorded in 1984 by the band Admas: Henock Temesgen, Abegasu Shiota, Tewodros “Teddy” Aklilu and Yousef Tesfaye.

Like so many Ethiopian expats in the U.S. at the time, the four young men had fled the Derg: the military junta that deposed Emperor Haile Selassie in 1974. As the White Terror gave way to the Red Terror, over a million people died in the violence.

Aklilu, the band's keyboard player, left Addis in 1977, aged 15, just before the worst of the Red Terror began.

“It was so sad, kids killed each other,” he told RFI on the line from Addis. “I went to the U.S. and basically closed my ears for the next two or three years.”

Aklilu closed his ears to the horror, but opened them to exciting new music.

When bass player Henock Temesgen, an old school friend, arrived in Washington DC in 1980 they began playing together.

“It was a very dark time but we found our cocoon, our own friends, playing in each other's houses. We tried to create our own group, our own happy times,” said Temesgen.

The need to experiment

The two friends played in a band called Gasha and took up residency at the Red Sea, a lively Ethiopian restaurant in Washington.

They would open for big Ethiopian names like Aster Aweke, playing instrumentals to audiences of expats, many of whom had lost friends and family in the civil war.

While they enjoyed traditional Ethiopian music, they immersed themselves in the sounds of their new home with its go go funk, jazz, highlife, samba and roots reggae.

“In DC you got to hear a lot more of what the world has to offer, than in Ethiopia, and it's very natural that when you hear something you want to experiment with it,” Aklilu explained.

What's more, there were new tools like Moog keyboards, synthesisers and electric guitars to play with.

Joined by drummer Yousef Tesfaye and multi-instrumentalist Abegasu Shiota, the musicians expressed their more experimental side under the new name of Admas.

“Abagasu liked to work with computers or stuff like that, he had a four track very basic recorder and started playing with it, and said it would be nice to record something,” Temesgen said.

They scraped the funds together to record seven tracks and had 1,000 copies pressed.

They gave most of them away, paid off their debts, but didn't make any money.

“We didn't have any business sense,” Aklilu laughed. “We still don't!”

“The experimentation was not in the melody but in the harmonisation and rhythm,” said Aklilu.

They did “a reggae-ish version” of Wed Enate, put samba rhythms into Samba Shegitu and paid tribute to Ghanaian highlife on Bahta's Highlife although, as Aklilu admitted, it owes more to Congolese soukous.

On Tez Alegn Yetintu, the band drew out its melancholic blues feeling.

“It's a popular song and we played it in half time, so for a lot of people the melody would be very slow. But we played it like a really melancholic blues song.”

The age group that just escaped

Spurred on by the optimism of their youth, Admas bent some of these melancholic old melodies into new shapes.

“I think the music you can hear on the album is our experience of America basically, it was more hopeful than sad,” said Aklilu.

“We were not damaged by the revolution, we escaped, we were lucky. And I think the album might reflect that age group that just escaped.”

The men moved on, went their separate ways and forgot about the album.

Then decades later, Aklilu was contacted by Andreas Vingaard, founder of NY-based Frederiksberg Records. A big fan of Francis Falceto's Ethiopiques compilations, Vingaard had stumbled on Sons of Ethiopia and wanted to reissue the record.

“When I heard Admas for the first time, it sounded very different from any other Ethiopian music I had heard,” he told RFI.

“It's clearly Ethiopian, but it's different and familiar at the same time. It's incredible to me that so many years later it still has a real freshness to it.”

The men were surprised the album had generated new interest.

“We didn't know but a lot of people have been collecting it and liked it; it was being sold for a lot of money on eBay. Somebody said the album had a cult following,” Aklilu recalled.

“It is great music,” Temesgen admitted, but “I didn't think people outside the Ethiopian community would know about the way I felt.”

“It will be a surprise for this generation I think,” said Aklilu.

The beat goes on in Addis

Three of the band members have made successful careers in music.

Aklilu now works on music research projects and sometimes tours with Ethiopian pop star Teddy Afro, Temesgen has become a prominent music educator and Shiota is one of the country's top recording engineers. They've played together and don't rule out releasing another Admas album one day.

The music scene in Ethiopia is “very vibrant” the Admas duo said, with lots of young bands playing in a range of genres: ethio-jazz, pop music and traditional.

But this promising scene is hamstrung by heavy import taxes of up to 300 percent on musical instruments, which are deemed luxury items.

“It's killing the music here, it's really damaging us,” regretted Aklilu. “Musicians can't afford instruments; it's one thing the government needs to change so music can grow in this country.”

Sons of Ethiopia, on vinyl and cd, complete with detailed liner notes, is available here.