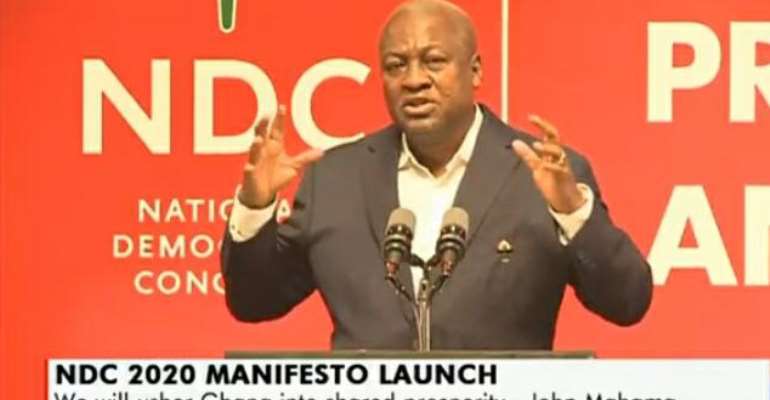 The opposition National Democratic Congress has launched its manifesto as the December polls fast approaches.

The flagbearer John Dramani Mahama has described the document as one that holds the key to the destiny of Ghana.

“This manifesto holds the key to Ghana’s destiny”.

The document is themed ‘Jobs and prosperity for all; the people’s manifesto”. The party, in addition, launched the braille version of the document to aid persons living with disability (PWD’s) appreciate the NDC’s campaign promises.

The NDC’s flagbearer and running mate amongst other things promised free tertiary education for PWD’s, include private schools in the Free SHS program, and also rescue Ghana from the abyss. The party also disclosed it will absorb fifty per cent of fees for tertiary students for the 2020/2021 academic year.

Mr further promised the arty will construct a domestic airport in the Upper East region,” adding “the land was secured when I was President and so we will continue with it.”

“Irrigation dams which will be constructed across the country if the National Democratic Congress wins power will be funded by the Ghana Exim bank,” it added.