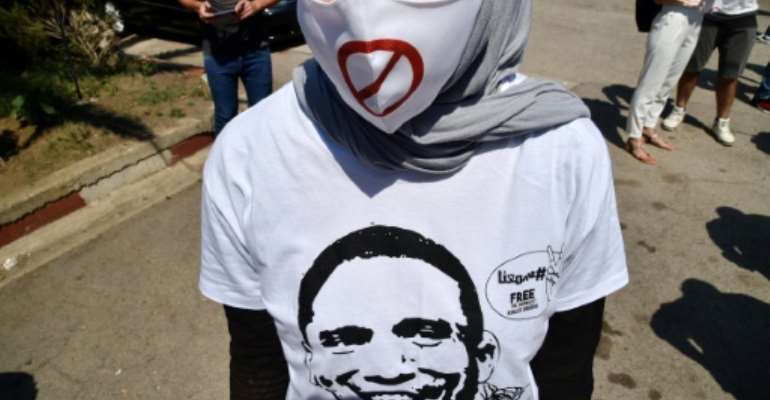 Rallies demanding the release of jailed Algerian journalist Khaled Drareni have been held in Algeris, Paris and Tunis making his appeal a test case for the authorities. By RYAD KRAMDI (AFP)

An Algerian court is to begin hearing an appeal Tuesday by journalist Khaled Drareni against a three-year jail term handed down last month in a case seen as a barometer of press freedoms in the North African country.

Drareni, 40, editor of the Casbah Tribune news site and correspondent for French-language channel TV5 Monde, was convicted of "inciting an unarmed gathering" and "endangering national unity" in his coverage of demonstrations by the Hirak protest movement which swept longtime president Abdelaziz Bouteflika from power last year.

Drareni will not be in court for the appeal. Instead, he will appear by video conference from the Kolea prison outside Algiers, where he has been incarcerated since March 29.

Since Drareni was jailed last month, thousands of people have signed petitions calling for his release, noting that his sentence was "the heaviest" handed down to a journalist in decades.

Drareni was arrested on March 7 while covering a protest led by the Hirak, and accused of having criticised Algeria's political system on Facebook, according to RSF.

He has denied the accusations against him, insisting during his trial that he had been merely doing his job as an independent journalist and exercising his right to inform.

The appeals of co-defendants Samir Benlarbi and Sliman Hamitouche, both leading Hirak figures, are also being heard. They were each sentenced to two years in jail.

On the eve of the trial, journalists and human rights activists rallied in Paris, Algiers and Tunisia demanding that Drareni be freed.

Instead, they have "made him a symbol of the defence of freedom of the press", he added.

Drareni's appeal comes as the government prepares to hold a constitutional referendum that is expected to rekindle the protest movement that ousted longtime president Abdelaziz Bouteflika last year. By RYAD KRAMDI (AFP/File)

Drareni's appeal comes after the government agreed draft changes to the constitution over the weekend that will be submitted to parliament for approval ahead of a nationwide referendum in November.

President Abdelmadjid Tebboune said the reforms "respond to the demands of the popular movement".

Tebboune, a former premier under Bouteflika's rule who was elected in December, has promised to break with the old regime, which was seen as synonymous with authoritarianism, corruption and nepotism.

But the constitutional changes his government is proposing fall far short of the protest movement's demands for wholesale political reform and the departure of all Bouteflika-era officials.

Regular weekly protests organised by the Hirak movement were stopped in March in the face of the coronavirus pandemic.

But as the referendum looms, they are expected to regain steam.

In the meantime, the government has kept up a crackdown on the protest movement and its supporters in the political opposition and the media.

The CNLD prisoners' rights group says authorities are currently holding around 45 people linked to the Hirak.