By Helen Roxburgh with AFP bureaus 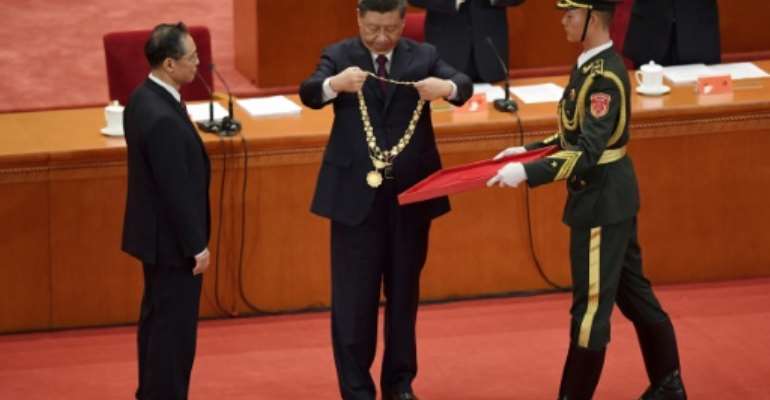 Chinese President Xi Jinping (C) hands a medal to Zhong Nanshan (L) -- the country's most famous medical expert who emerged as the face of China's fight against Covid-19. By NICOLAS ASFOURI (AFP)

China's leaders held a triumphant ceremony to celebrate beating the coronavirus on Tuesday, as billions of people around the world still suffer the fallout from the pandemic and the global death toll nears 900,000.

The upbeat mood in Beijing comes as concerns grow about a resurgence of Covid-19 across Europe, with France tightening restrictions, cases in Britain spiking and schools resuming around the region in recent days.

Worldwide infections to date now stand at more than 27 million and over 890,000 people have died from the disease, with the pandemic showing no sign of peaking.

But in China the virus has been all but banished through a combination of lockdowns and travel restrictions earlier in the year that have officials touting the nation as a coronavirus success story.

President Xi Jinping said China had passed "an extraordinary and historic test" during an awards ceremony for medical professionals decorated with bugle calls and applause.

"We quickly achieved initial success in the people's war against the coronavirus," Xi said.

"We are leading the world in economic recovery and in the fight against Covid-19."

The New Delhi metro reopened on Monday after a five-month closure. By Noah SEELAM (AFP)

The nation's propaganda machine has been attempting to seize the narrative surrounding the pandemic, reframing the episode as an example of the agility and organisation of the Communist leadership.

Xi had stern words for China's doubters, saying "selfish moves, any buck-passing and deeds that confuse right and wrong" risked inflicting damage across the world.

Beijing is also touting progress on its vaccines as a sign of global leadership and resilience.

China put its homegrown Covid-19 vaccines on display for the first time at a Beijing trade fair this week and authorities hope the jabs will be approved for use by year-end.

The vaccines are among nearly 10 worldwide to enter phase 3 trials, typically the last step ahead of regulatory approval, as countries race to stub out an illness that continues to ravage large parts of the globe.

'We have to get out of our homes'

Spain on Monday became the first country in Western Europe to pass half a million infections. The nation had largely gained control over its outbreak but cases have surged since restrictions were removed at the end of June.

Morocco is also facing a spike in cases, officials saying it risked overwhelming the country. By STR (AFP)

In neighbouring Morocco, the government shut all schools and imposed a lockdown on Casablanca on the day classes were supposed to resume after cases surged in the city.

Officials said the virus risked overwhelming the North African country if it was not controlled, but some parents were left fuming.

"They were on cloud nine over returning to school tomorrow," one father wrote of his children on Twitter.

"How do you explain this to a six-year-old and an eight-year-old?"

Restrictions have also been reimposed in France where seven more regions were placed on a red list after successively recording daily infection rates of between 7,000 and 9,000.

An Egyptian medical worker checks blood donated from a person who recovered from Covid-19 inless at the National Blood Transfusion centre in Cairo. By Khaled DESOUKI (AFP)

And in England, officials fiddled with overseas quarantine rules again, imposing curbs on travellers from seven Greek islands popular with holidaymakers, after Britain at the weekend registered a level of infection not seen since late May.

In Asia, India pressed ahead with reopening its battered economy even as it surpassed Brazil on Monday as the second-most infected nation in the world with 4.2 million cases.

Trains began running again in the capital New Delhi after a five-month shutdown and 12 other cities also restarted subway services.

"For our lives to move on, we have to get out of our homes... so this is a good move by the government," commuter Deepak Kumar told AFP in Delhi.

French footballer Kylian Mbappe became the latest sports star to test positive for the virus after his club teammate Brazilian forward Neymar was confirmed to have Covid-19 last week.

Mbappe has been ruled out of France's Nations League game against Croatia on Tuesday and is the seventh Paris Saint-Germain player to contract the illness.

A number of tennis players have also been infected, and on Tuesday, world number one Ashleigh Barty announced she will not defend her French Open crown due to virus fears.

The Australian star said it was a "difficult" decision but the health of her family and team came first.