By Alvaro Villalobos, with AFP Bureaus 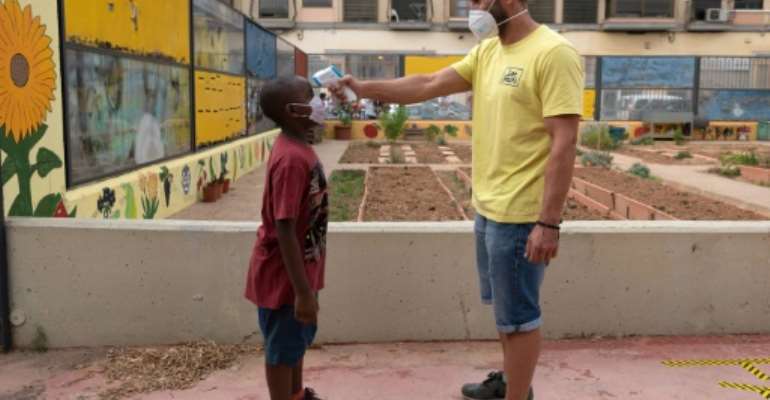 Some Spanish parents feared schools were opening too soon with millions of pupils returning on Monday. By JOSE JORDAN (AFP)

Spain has become the first country in Western Europe to pass 500,000 coronavirus infections, with French footballer Kylian Mbappe the latest sports star on the continent to test positive.

The new figures from Madrid came as concerns grow about a resurgence of the virus across Europe, with France tightening restrictions, cases in Britain spiking and schools resuming around the region in recent days.

Spain had largely gained control over its outbreak, but infections have surged since the restrictions were fully removed at the end of June, and there are concerns about the reopening of schools in the country.

"If we all take responsibility and here I am including the children... I believe that the return to school is very possible," health ministry official Fernando Simon said Monday.

"Although it will have an impact, it will certainly not have an excessive impact."

The return to school "is being treated like an experiment, we're like guinea pigs," said Aroa Miranda, a 37-year-old mother-of-two.

'We have to get out of our homes'

In neighbouring Morocco, the government shut all schools and imposed a lockdown on Casablanca on the very day they were supposed to reopen after cases surged in the city.

The New Delhi metro reopened on Monday after a five-month closure. By Noah SEELAM (AFP)

Officials said the virus risked overwhelming the North African country if it was not controlled, but some parents were left fuming.

"They were on cloud nine over returning to school tomorrow," one father wrote of his children on Twitter.

"How do you explain this to a six-year-old and an eight-year-old?"

Restrictions were also reimposed in France where seven more regions were placed on a red list after successively recording daily infection rates of between 7,000 and 9,000.

And in England, officials fiddled with overseas quarantine rules again, imposing curbs on travellers from seven Greek islands popular with holidaymakers, after Britain at the weekend registered a level of infection not seen since late May.

Worldwide infections to date now stand at more than 27 million and over 890,000 people have died from the disease, with the pandemic showing no sign of peaking.

Morocco is also facing a spike in cases, officials saying it risked overwhelming the country. By STR (AFP)

In Asia, however, India pressed ahead with reopening its battered economy even as it surpassed Brazil on Monday as the second-most infected nation in the world with 4.2 million cases.

Trains began running again in the capital New Delhi after a five-month shutdown and 12 other cities also restarted subway services.

"For our lives to move on, we have to get out of our homes... so this is a good move by the government," commuter Deepak Kumar told AFP in Delhi.

Israel has begun "a nightly closure" of 40 cities and towns with the highest infection rates. By MENAHEM KAHANA (AFP)

Mbappe has been ruled out of France's Nations League game against Croatia on Tuesday and is the seventh Paris Saint-Germain player to contract the virus.

A number of tennis players have also been infected, and on Tuesday, world number one Ashleigh Barty announced she will not defend her French Open crown due to virus fears.

The Australian star said it was a "difficult" decision but the health of her family and team came first.

French Open organisers have been forced to impose strict guidelines on players and far fewer spectators will be allowed to watch than initially planned.

Many sports have seen their calendars ripped to shreds by Covid-19, but the biggest single casualty has been the Tokyo Olympics, which were due to take place this summer.

International Olympic Committee vice president John Coates offered a note of hope on Monday, saying the rescheduled Games would go ahead next year regardless of the pandemic.

"These will be the Games that conquered Covid, the light at the end of the tunnel," Coates told AFP in an exclusive interview.