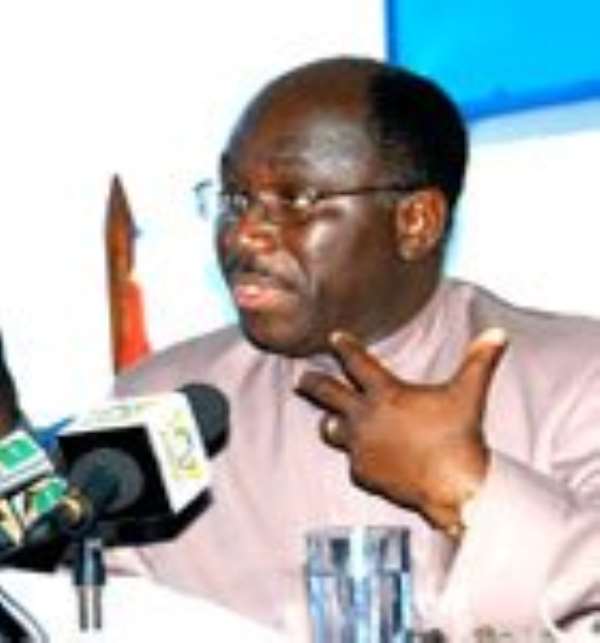 A scheduled press conference by the legal team of Dr Richard Winfred Anane, Minister of Road Transport, in Accra, to react to the findings and recommendations of the Commission on Human Rights and Administrative Justice (CHRAJ) against the Minister was called off at the eleventh hour on Sunday.


Mr. Ken Anku, who described himself as Media Consultant to the Legal team of the Minister, apologized to disappointed journalists and the general public that the conference could not come off due to some serious setbacks and the fact that the team had not yet been given an official copy of the rulings.

He would however, not explain the "serious setbacks", adding, "I'm not obliged to do so."

Mr Anku had earlier told anxious journalists some minutes after 1000 hours, the original time for the press conference, that it was being rescheduled to 1230 for technical reasons.

He then told the press that the legal team would go to court to challenge the rulings of the CHRAJ The Commission last Friday, among other things recommended that Dr Anane should be relieved of his post following findings of abuse of power and conflict of interest against the Minister.

Meanwhile, President John Agyekum Kufuor has assured the nation that government would act according to law and the right thing would be done in the case of recommendations of the Commission on Human Rights and Administrative Justice (CHRAJ) that Road Transportation Minister, Dr Richard Anane, be dismissed.

A statement signed in Accra by Mr. Kwamena Bartels, Minister of Information and National Orientation, said the contents of the report had been conveyed to President Kufuor, who is out of the country attending meetings of the Non-Aligned Movement and UN in Havana and New York respectively.

However, it said, neither the President nor the Attorney-General had received the official copies of the report.

"The President has therefore, instructed the Attorney-General to obtain, speedily, the original report of CHRAJ for thorough and critical study in order to advise Government on it for appropriate action to be taken in accordance with the law.

"As His Excellency the President has always stated, nobody is above the law. He recognizes and respects this principle. "Government wishes to assure the nation of its commitment to the rule of law and the institutions of democracy, including CHRAJ. "The President further wishes to assure the nation that upon receipt of the advice of the Attorney-General, government will act according to law, and the right thing will be done." The investigation stemmed from his relationship with an American woman, Alexandria O'Brien when he was Minister of Health and money that was transferred to her.

The relationship developed into a love affair with Dr Anane and Ms O'Brien having a son.

The Commission recommended that the Minister apologised to the President, the Government of Ghana, Parliament and the people of Ghana. The Commission recommended that public office holders and Government appointees should undergo a course in conflict of interest and that Special Assistants should be paid from the Consolidated Fund if that position should be maintained.

It also called for the upgrading of the laws if the Government policy of zero tolerance on corruption should work. Lead Counsel for Dr Anane, Mr Jake Acquah-Sampson, speaking to the press, in reaction to the rulings said the findings did not reflect the totality of the evidence and that the Commission was prejudicial, selective, and politically motivated.

He said Dr Anane's team of lawyers would contest aspects of the rulings that were distasteful to their client adding, "we believe the Presidency would act maturely" with the rulings.
Audio File Available

Our members are dying, pay us – Contractors lament
14 minutes ago