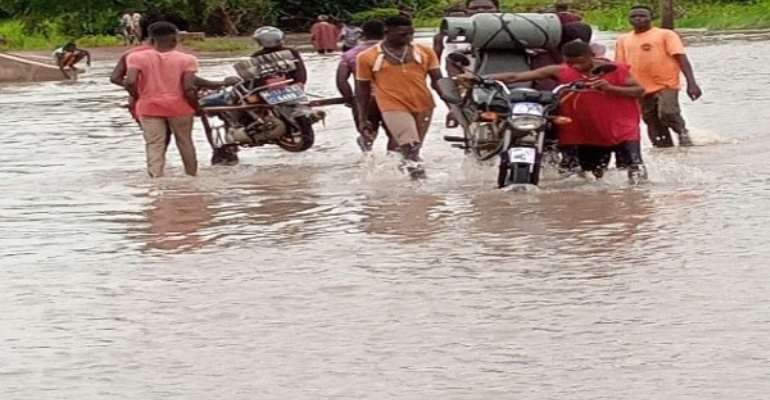 Junior High School (JHS) teachers in the Kologo and Naaga communities in the Kassena-Nankana Municipality of the Upper East Region, residing outside the communities, are finding it difficult to go to school to teach the final year students preparing for their examination.

According to residents of the two communities, anytime it rained heavily the water gathered at the Awinchokum stretch of the road where a bridge was being constructed, the force of the water damages the road and floods the area.

When the Ghana News Agency (GNA) visited the Awinchokum stretch of the road where the bridge was located, there was heavy flooding in the area making it impassable for residents but those who had no choice had to cross with the assistance from young men who had pitched camp close by the bridge assisting people for a fee.

A resident who spoke to the GNA pleading on anonymity said “I am a teacher in one of the JHS schools in Kologo and I am the only one who went to school today and that is because I passed the night there. The other teachers who stay in town couldn't come because they can't cross the bridge.”

“Going to work when it rains is expensive for us because you have to pay GHc 5.00 for the boys to help you to cross and when you're returning home after work you still have to pay the same amount of money for them to help you cross. How can you be paying GHc10.00 everyday just to cross a bridge?”

Another resident Stephen Aing-pah who is a farmer said: “At the moment, I don't know what we would do if there is an emergency at our health centre and we have to refer the sick person to the hospital in Navrongo or Bolgatanga”, he said.

At the time of the GNA's visit, a health worker with the Navrongo Health Research Centre who was travelling to Kologo to collect a research sample was stranded at the bridge.

He said he had spent an hour at the bridge trying to arrange with his colleagues at Kologo to send the sample to the bridge site so that he could pay the boys to cross and pick it for him.