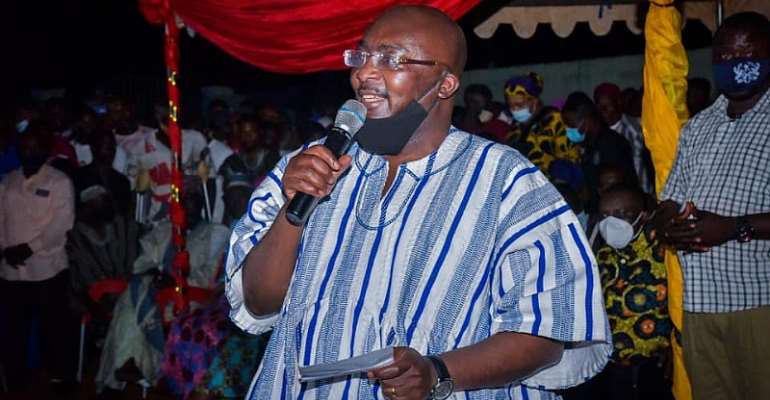 Vice President Dr Mahamudu Bawumia has also called on the people of the Savannah Region to reward President Akufo-Addo for creating the region he promised in 2016.

After urging the electorate in the Yendi Constituency to do same after sealing the peace process in Dagbon, Dr. Bawumia reminded the chiefs and people of Wasipe Traditional area in the Daboya-Mankarigu constituency that it took the Akufo-Addo administration two years to deliver the region they have been yearning for.

“The people of Savannah, for over 50 years, have been crying for a new region. No government was able to do it. Nana Akufo-Addo had the courage to do it.”

He also said the new regions were created to aid their development.

“When we looked at the north, we said the Northern Region is one of the largest regions in terms of the landmass in Ghana. If we are going to maintain it, in that context, it would take a long time for the development to spread.”

“This region, as you can see and feel already, will lead to more development in all the districts of this region,” Dr. Bawumia added.

The creation of the region followed the presentation of a petition by the Gonja Traditional Council, led by the Yagbonwura Tumtumba Boresa Jakpa I.

A referendum was conducted on December 27, 2018, which showed that 99.7% of the voting population was in favour of the new region’s creation.