Nima Kawakudi Park To Be Redeveloped Into Multipurpose Mini Stadium 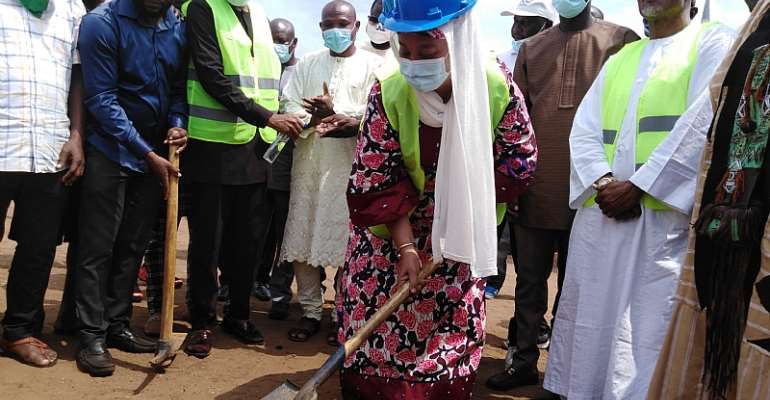 Hajia Salma, the Ayawaso East Mayor cutting sod for commencement of the project

The famous Kawakudi Park at Nima in the Ayawaso East Metropolis of the Greater Accra Region is set to be redeveloped into a multipurpose mini stadium.

The project which is expected to be completed by November 2020, will also have an astro turf pitch, changing rooms, seating capacity, inner peri meter fencing, among others.

At a sod cutting ceremony at Nima on Monday to commence the project, Mr. Jerry Ahmed, the Chief Executive Officer for the Coastal Development Authority (CODA) called on the people of the community to support the project to come to fruition.

According to him, the Kawokudi multipurpose stadium forms part of the government of Ghana's IPEP One million US Dollar, One Constituency flagship program.

He explained that the government through the Ayawaso East Municipal Assembly had a consultation meeting with various stakeholders to come to an amicable agreement before the sod was cut for the project to commence.

Mr. Jerry Ahmed described the stakeholders meeting with the community members as very necessary because they own the project.

He added that the government is not developing the park to charge money from community members in return. " It will be an arrangement between the Municipality and the Committee to be put in place to be in charge of the park after completion".

The park after completion can be used for other purposes such as religious services for both Muslims and churches, marriage, funerals and conferences.

He indicated that workers for the project from contractors, labourers and other artisans will come from the Municipality.

The project which is to be undertaken by MSH AstroTurf Limited, has come to stay and will stay forever, the CODA CEO noted.

The CODA Boss also revealed that there are other projects going on under the IPEP in the Ayawaso East Metropolis which need the support and attention of the people ,especially the chiefs.

He mentioned the redevelopment of the Nima Market as an IPEP project sanctioned by the President of the land. He used the opportunity to alley fears of the people especially women who sell at the market that the place has not been sold.

No one, Mr. Jerry Ahmed, pointed out can sell the Nima market.

On her part, the Municipal Chief Executive for the Municipality, hon. Hajia Salma Mohammed Sani Kuta described the day as an important day in the history of the Municipality. She also expressed her profound appreciation to the government for chosen the Ayawaso East as an IPEP beneficiary.

She also thanked the chiefs and community leaders for their support but was quick to charge them not to relent on their efforts until the project is completed.

She promised her outfit's total support to ensure that the multipurpose projects comes to realisation.

Meanwhile, hon. Isaac Kwame Asiamah, the Youth and Sports Minister commended the people of Ayawaso East for accepting the project.

He promised that his Ministry will give all the necessary administrative and technical support needed to complete the project. He however, bemoaned that the Ministry was not consulted for technical advice on most of the astron turf projects in the country hence challenges associated with most of them.

He said, President Akufo-Addo has shown and demonstrated to the people his love for sports and its development in Ghana.

For the first time in Ghana, government is constructing ten state of the arts FIFA standard stadiums nationwide. This shows that we have a President who loves sports development.

Hon. Peter Mireku, the NPP Parliamentary Candidate for Ayawaso East Constituency, expressed the joy that finally a major sports project is being undertaken in the community.

He was hopeful that after completion, it will go a long way to nurture and provide football talents for the Black Stars and other national teams.

The sod cutting ceremony was also graced by chiefs and opinion leaders within the Ayawaso East Metropolis.