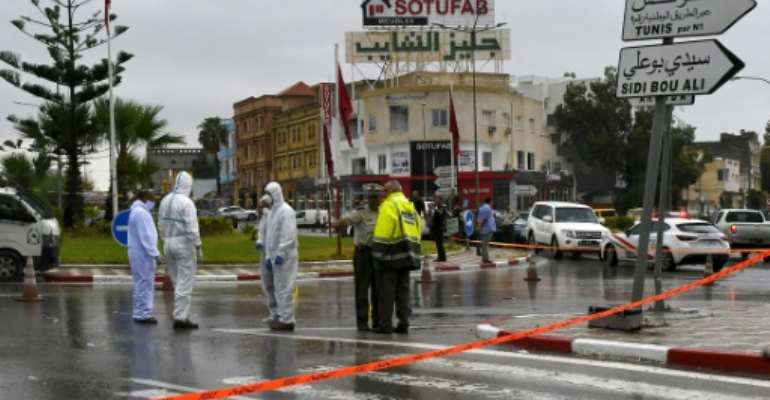 Tunisian forensic police investigate the site of an attack on Tunisian National Guard officers on September 6, 2020, in Sousse, south of the capital Tunis. By Bechir TAIEB (AFP)

The Islamic State group claimed responsibility on Monday for a knife attack in Tunisia which killed one National Guard officer and wounded another, as security forces rounded up more suspects.

The attack on Sunday morning in a tourist district of the coastal city of Sousse saw a group of assailants ram a patrol of the National Guard with a vehicle before stabbing the officers.

They were chased by security forces before three of them were shot dead in an ensuing gun-battle, the Guard said, labelling the attack a "terrorist" act.

The Islamic State group said Monday its "fighters" had carried out the attack, in a brief statement by its propaganda arm Amaq on the Telegram messenger service.

"Photos show that one of the attackers was wearing a T-shirt with a specific inscription to Daesh (IS)," said Mokhtar Ben Nasr, former head of the National Counter-Terrorism Commission, while stressing it was difficult to establish precise links between the group and its supporters.

Tunisia, since its 2011 revolution, has been hit by a string of jihadist attacks that have killed dozens of security personnel, civilians and foreign tourists.

Sunday's incident took place close to the site of the deadliest attack, when 38 people, most of them British tourists, were killed in a 2015 beachside shooting rampage.

Tunisian authorities said Monday they had arrested seven people over the attack.

National Guard officer Sami Mrabet, a 38-year-old father of two, was buried Monday in his hometown of Moknine south of Sousse, in the presence of more than 1,000 people, including several government officials, an AFP correspondent reported.

Map of Tunisia locating the coastal city of Sousee where a knife attack on Sunday killed a Tunisian National Guard officer and wounded another with three assailants also killed.. By (AFP)

They included "the wife of one of the assailants, who described her husband as a 'martyr' during the interrogation," he said.

Two brothers of one of the attackers and a person suspected of recruiting them were also arrested, he added.

He said the attackers were twin brothers and a third man from the marginalised northwestern region of Siliana. He did not confirm or deny reports of a fourth assailant.

Jebabli said the twins had visited Facebook pages dealing with "explosive and armed attacks" but had stayed under the radar of the authorities.

Tunisia's President Kais Saied, on a visit Sunday to the scene of the knife attack, said police were investigating whether the attack was planned "by individuals or an organisation".

Mechichi, in a statement from his office, urged Tunisians "not to be afraid" of assailants, whom he described as "microbes".

Sunday's attack was the first since March, when a suicide operation against security forces protecting the US Embassy in Tunis killed a Tunisian police officer and left several others wounded.

The year 2015 was particularly bloody, with three major deadly attacks claimed by the Islamic State group.

An attack at the capital's Bardo museum in March killed 21 foreign tourists and a security guard.

Three months later, the 38 tourists were killed in the shooting at Sousse.

And in November of that year, a bomb blast on a bus in central Tunis killed 12 presidential guards.

While the situation has significantly improved since then, Tunisia has maintained a state of emergency.