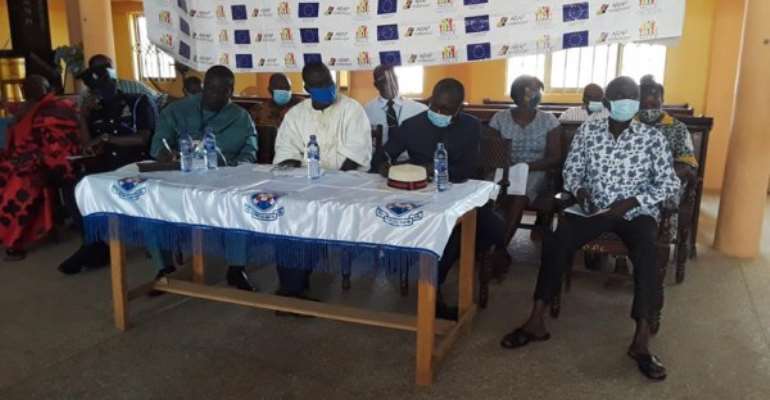 The chiefs, Elders and people of Osenase and the surrounding communities have called for the completion of the E-Block started by the previous Mahama government to enable the area to have access to a secondary school.

The people argued that despite the fact that the area is the second most populated area in the West Akyem Municipality with rising population, yet it lacked a secondary school.

This came to light at a social auditing organized by the West Akyem Municipal Secretariat of the National Commission for Civic Education (NCCE) at Osenase in the Eastern Region.

The people questioned why over 80 per cent of the development projects implemented by the Municipal Assembly from 2017 to 2020 were concentrated in the Asamankese area.

The West Akyem Municipal Chief Executive (MCE), Mr Seth Oduro-Boadu, assured that the issues raised by the community would be addressed by the Municipal Assembly.

He, however explained that the current policy of government is to encourage landlords to provide toilets in their houses.

Ms Modesta Annie Sapaty, West Akyem Municipal Director of the NCCE, encouraged the chiefs and people of Osenase to demand accountability from duty bearers, since that is one of the surest ways of curbing corruption in public life.

Ms Sapaty explained that social auditing also helped to promote community ownership of developmental projects and increased awareness of the people on operations of the local government in their area.

She said the social auditing project was part of the Accountability, Rule of law and Anti-corruption Programme (ARAP), which sought to promote good governance in Ghana by reducing and improving accountability in compliance with the rule of law.

Nana Agyenim Boateng, Kyiridomhene of Osenase who chaired the programme, expressed appreciation for the platform created for citizens to express their concerns in the presence of the duty bearers and urged the office holders to do well to address the concerns raised by the people.