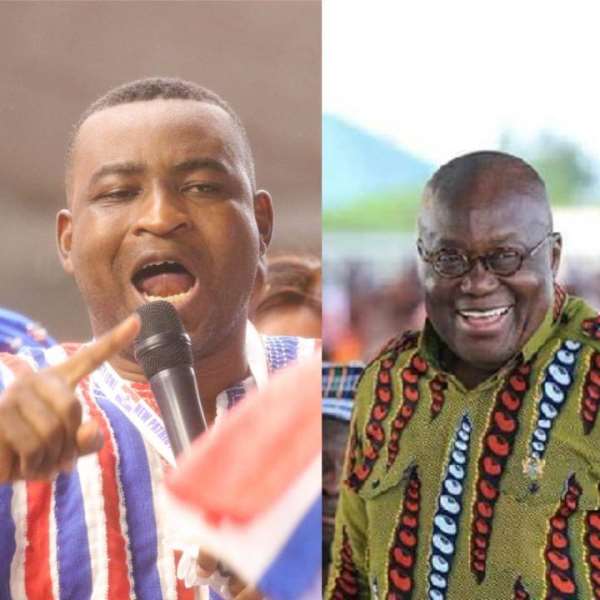 A member of the communications team of the National Democratic Congress, Benjamin Essuman, has called on President Akufo-Addo to condemn his party members including NPP’s Ashanti Regional Chairman Bernard Antwi-Boasiako including Abronye DC who have openly attacked members of the NDC before he calls on former President John Mahama to apologise for sharing a derogatory post.

According to Mr Essuman, the president and the NPP are the worst culprits when it comes to politics of insults in Ghana and has lost the moral right to demand an apology from Mr Mahama.

“This is the same person who called John Mahama, Simpa Panyin. When it comes to insults and tribalism, nobody comes close to Akufo-Addo. This is the same man who called Prof. Mills ‘Professor do little’. Has he [Akufo-Addo] addressed Chairman Wotumi when he called Jane Opoku Agyemang a witch?,” Mr Essuman on Morning Starr.

Mr Essuman added “The king of political insults in this country is Kennedy Agyapong and he’s a member of the NPP. This is a man who insulted a judge and nothing has been done to him.”

President Akufo-Addo on Friday complained to Catholic Bishops at a meeting at the Jubilee House after Mr Mahama shared an article by lawmaker Isaac Adongo which used the labelling ‘Akyem Sakawa Boys’ for some individuals in government.

“Archbishop, this name-calling seems to be a feature of Ghanaian public life. But sometimes, when things come out, we would hope that you will comment on them. The comment made by my opponent, “Akyem Sakawa people,” I have not heard any public figure, independent person, yourselves, comment on it. It is completely unacceptable. If I were to get up to make comments about Northerners or Gonjas, you can imagine the uproar that would be in the country.

“Presidential candidate, a former President of Ghana, you can call a group of Ghanaians “sakawa people”, and it involves the group for which the sitting President comes, and that statement goes without comment, and at the same time we hear all these statements, let all try and bring the politics of insults to an end,” the President bemoaned.

But in a response, the flagbearer of the opposition NDC said the president has no right to be angry over a description of some members of his government as “Akyem Sakawa boys” after he consistently described former presidents with unprintable words when he was in opposition.

“President Akufo-Addo has lost the right to complain a long time ago, he was the opposition leader who called presidents before him anything you can imagine, including ‘professor Do little’ and then he described somebody as ‘simpa panyin’. He is the president who has called his critics naysayers, professional Jeremiah's, I don’t understand on what standard he can be offended at this time because he has a precedence.

“I think that temperaments in leadership is very important and there are many things a president must attend to and you must not appear in public to have lost your cool and I think he should maintain his temperament to come across as a good leader,” Mr Mahama said.