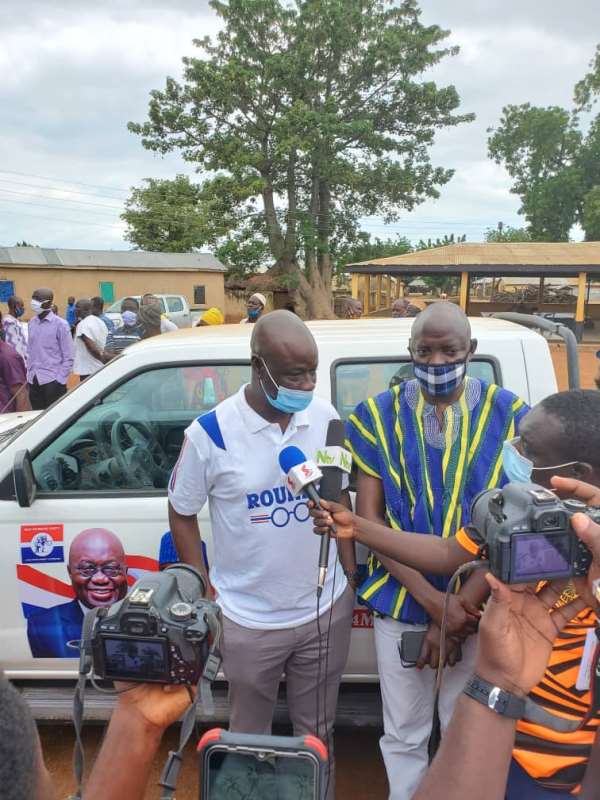 The Deputy Managing Director of the Agricultural Development Bank (ADB), Mr. Alhassan Yakubu-Tali, has called on Ghanaians, especially the people of the Northern region, to retain the NPP to continue with its good works especially in the area of agriculture.

With the sector being the highest employer of the country's labour force, engaging about 40% of the population, he stressed that a government that deserves another mandate must show an unparalleled record in the agricultural sector.

“Today, you just heard the Vice President announce Government's decision to convert the Pong Tamale Veterinary College into a University for agriculture. These are really exciting times for the people of the Northern region and Agriculture as a whole” he stated.

Mr. Alhassan Yakubu-Tali, a member of the 2020 NPP Northern Regional Campaign team, made these remarks on the sidelines of the Vice President Mahamudu Bawumia's campaign tour of the Northern Region which began on the 3rd and ended on 6th September 2020.

Giving further examples of the NPP record in the agricultural sector, he pointed to the Pwalugu multi-purpose dam, a plan which had been on the drawing board since independence in 1957.

But under the NPP government, some US$993million is being sunk into the construction of the dam, the biggest single investment made by any government in the Northern part of the country.

The deputy ADB MD explained that these projects and programmes are adequate proof that the Akufo-Addo government is committed to modernizing the agriculture sector, improving production efficiency, achieving food security and increasing profitability for farmers.

“So I trust that our people will give the NPP, 4-more to do more for them; since we have walked the talk when it comes to the commitment to transform the agricultural sector,” he said.

Speaking to ADB's contribution to the sector, Alhassan Yakubu-Tali disclosed that ADB under the previous NDC administration had veered away from its core mandate.
But under the new management appointed in 2017, the bank is re-focusing on agricultural financing. Thus far, this agenda is on course with the bank setting up an Agric Division with two Departments to finance the full Agric value chain as well as committing to increasing the Bank's Agric loan portfolio to 50% of its total loan portfolio.
He also commended the Akufo-Addo government for the setting up the Ghana Incentive-based Risk-Sharing System for Agricultural Lending (GIRSAL) to finance and de-risk private sector investments in farming and other agricultural value-chain activities. This scheme is to encourage financial institutions to invest more in agriculture and already, it has started paying off, the deputy MD said.
In May 2020, ADB announced that in partnership with GIRSAL, the Ministry of Food and Agriculture (MoFA), the Bank of Ghana (BoG) and the Out-grower and Value Chain Fund (OVCF) it is investing GHS500 million into a 3-year investment programme for Ghana's poultry industry. The programme is meant to end the country's dependence on imported poultry products and create jobs for the youth.
Quoting US president, Thomas Jefferson, the deputy ADB MP said: “agriculture is our wisest pursuit because it will, in the end, contribute most to real wealth, good morals and happiness.”
“So, let us stick to a government that is committed to modernizing the sector that employs the lot of our people so that we will be assured of economic growth and jobs for our people,” he urged the people of the Northern Region.

This is what Akufo-Addo and US Vice President Kamala Harris ...
56 minutes ago