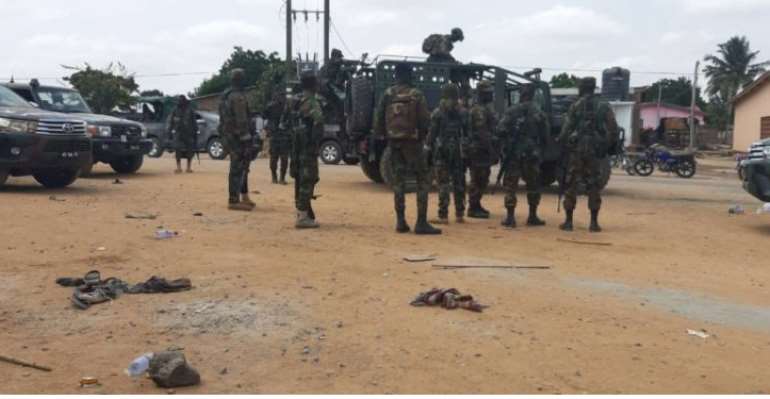 Some residents of Dome Faase in the Greater Accra Region whose properties were allegedly destroyed by military officers, want to be compensated by government.

The military invaded the area after two of their men were physically assaulted by the community over boundary disputes between the Mponuahene of Akyem Apedwa and the coalition of Ga states.

The said assault of the military men made headlines in the media space, with many condemning the act by the community.

A section of Ghanaians also criticized one of the key actors, Sarpong Kumankuma for encroaching on the land he does not own.

After the assault on their men, the military deployed officers to the area to restore and also search for some firearms allegedly seized by the community.

Barely two weeks after the incident, some residents want compensation for the alleged destruction of their belongings such as television sets, fridges, air conditioners among others.

Some of the residents who spoke to Citi News said they have been forced to spend extra cash to purchase these items again.

“When I got back to the town, I realised my air-conditioner was destroyed. My room was also broken into and my laptop was taken. I am a teacher and it is actually someone’s laptop I was working on to put some installations on. So I think the government has to step in to cater for the lost items.”

Aside from the loss of personal properties, a resident sustained gunshot wounds while trying to flee from the area. Another elderly man was reportedly assaulted by the military.

For the family of the late Tetteh Kofi, their brother died as a result of the shock he suffered when the military randomly visited his house as part of their routine checks in the area.

Business activities in the area remain slow as a result of the incident, since many still live in fear.

Some okada riders in the area say they have been kicked out of business after their motorbikes were seized.

Assemblyman for the Paanor electoral area in Dome Faase Vincent Sogah believes compensation is needed to put the issue to rest.

“We are pleading with the government because some of them need compensation because they are not able to work because of their properties have been destroyed,” he said.