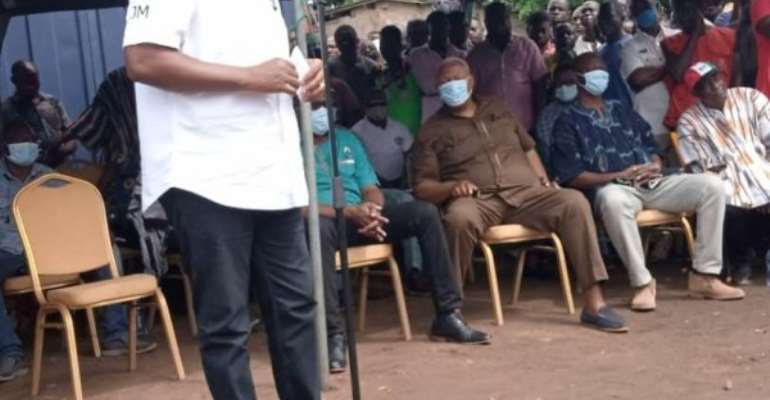 Former President and Leader of the National Democratic Congress (NDC) for the 2020 Elections Mr John Dramani Mahama, has promised to establish a training centre at the 'Wa Magazine'(place designated to automobile craftsmen} to promote skills training for the youth.

That, he said would be done under a programme dubbed “the National Apprenticeship Programme” which would register all master craftsmen and women all over the country for them to pass on their skills to the youth interested in acquiring similar skills.

Former President Mahama who gave the promise when he met workers at the site during his four-day campaign tour of the Upper West Region, noted that many of the youth who came to learn the skills often found it difficult to pay their fees.

According to him, it often resulted in them moving down south to engage in menial jobs to be able to raise the money in order to come back and pay for their training.

“We will finance the apprenticeship fees for 200,000 young people and provide them with the tools that they need to be able to open their own workshops”, he said.

Former President Mahama also noted that the next NDC administration would create a small credit scheme to enable the master craftsmen have access to such funds to buy modern machines to provide effective services.

The Leader of the NDC for the 2020 Elections also hinted that they would also make technical and vocation training free up to the tertiary level for the master craftsmen who wished to go back to school to acquire more skills.

“We will integrate modern automobile training into the programmes of these technical and vocational training schools to improve their skills”, he said.

Responding to some other concerns raised by Mr Abdulai Ahmed, Secretary to the Wa 'Magazine' Workers Association, former President Mahama said a new NDC administration would work with them to re-engineer the place by properly demarcating the roads, drainage system and the various workshops to create an enabling environment there.

He appealed to them to vote the NDC back to power come December 7, to enable it continue to implement the good programmes and policies to improve on the people's quality of life.