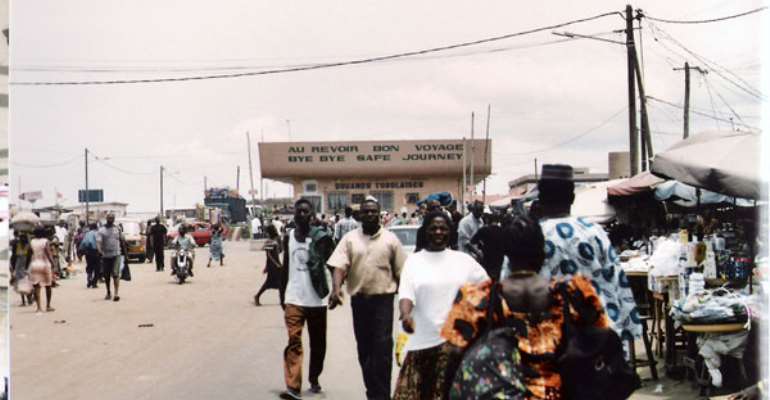 In spite of the protocols of the Economic Community for West African States (ECOWAS) that guarantee free movement for its members within the member- countries, immigration officers at the Aflao/Lome border are demanding between 1,000fcfa and ¢20,000 from users of the border.

All those who fail to pay the 'mandatory' kontomire four (4 ¢5000) or ¢20,000 are physically and verbally assaulted by these shameless immigration officials on a routine basis on this eastern exit corridor.

At least, some ¢200 million bribes are extorted from an estimated 10,000 people who use the border on a daily basis. This figure when projected, amount to over ¢7billion annually that goes into the pockets of paid employees of the government. This has made the traders poorer and discouraged many others from using the border altogether, since some of them feel humiliated by the ill-treatment meted out to them, especially the beatings by these immigration officials.

The practice, which greatly undermines ECOWAS free movement of goods and people from and within member countries for easy integration, has become so rampant that using a valid traveling documents like a passport has now become a bane rather than a blessing, at least, on the Ghana/Togo border.

The problem is even worse when one possesses a passport, something that should not be the case. All users of this border who possess passports are asked to cough 1000francs at each stop before being allowed entry into Lome.

Although both Ghanaian and Togolese immigration officials are neck deep in the practice, it is worse with those on the Togolese side.

On entering Lome from Ghana, one sees as many as three Togolese immigration officials that one would have to see before one would be allowed to enter the country, and at every stop, one is asked to pay the 'mandatory' 1,000francs.

A visit to the border at the weekend by this reporter saw the trouble that travelers go through at the hands of these immigration officials, who have thrown all caution to the wind and openly ask for money before stamping the passports for travelers.

While Ghana officials at the border claim that they started demanding money from non- Ghanaian travelers before stamping their passports in retaliation for what Ghanaians go through at the hands of their counterparts from Togo, the officials in Togo also claimed that the practice only started when it was realised that their citizens were being harassed by Ghanaians.

At the office of the Ghana Immigration Service, last Sunday, at the Aflao border, a Togolese who was returning home was seen seriously arguing with a GIS official, as he did not understand why he should pay when he had a valid passport.

He was told in plain language "to go and ask his people why they collect money from Ghanaians before stamping their passports." After a lengthy argument, the gentleman grudgingly parted with the said money.

Apparently oblivious of the practice, the gentleman came to his 'countrymen' to lodge a complaint and to also enquire from them, if that is the normal practice. At the time he came, this reporter was also being held by the Togolese officials for refusing to pay either ¢20,000 (kontomire four- as they call it) or the 1,000francs.

Not even a valid passport would spare one from the claws of the these unscrupulous immigration officials at the Aflao border, who would go to any extent, including physical assault, to ensure that one pays the money before being allowed entry into the country. Another incident witnessed by this reporter last Monday left much to be desired, as a Ghanaian who was returning home was given the beating of his life for daring to challenge the Togolese on why he should pay them for stamping his passport.

For trying to prove too 'stubborn' and insisting that the right thing be done, this law abiding Ghanaian was rewarded with a trouncing slap.

A random survey conducted later among some traders who regularly use this corridor, revealed to The Heritage that it is now a curse to own a passport, "as you end up paying more than if you were traveling without any traveling documents." According to one trader, it is safer to travel 'light' (without luggage) and with maybe an ID card than a passport.

$200 million Saglemi scandal: Funds were not directly given ...
36 minutes ago