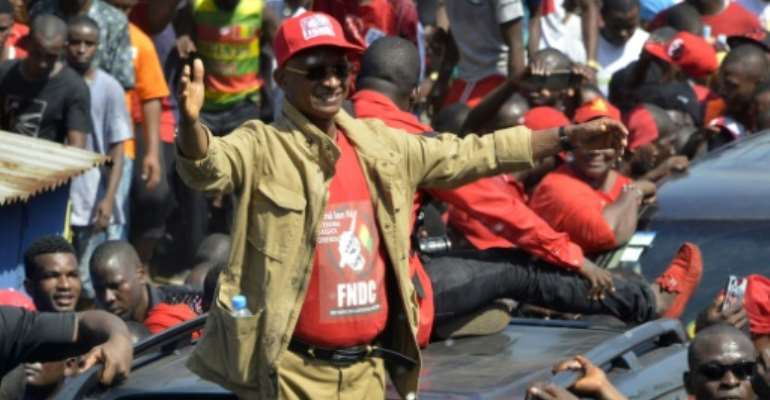 Cellou Dalein Diallo waves to the crowd at a protest against the third term of President Alpha Conde. By CELLOU BINANI (AFP/File)

Guinea's former premier and leading opposition leader Cellou Dalein Diallo on Sunday announced his plans to run in next month's election against President Alpha Conde, who is seeking a controversial third term.

Conde filed his nomination papers on Thursday despite outrage and widespread protests in which dozens have been killed.

The 82-year-old, nearing the end of his second and final five-year spell in office, this year pushed through a revamped constitution that opponents say was crafted to reset the term counter.

"I am running for the presidential election so that Alpha Conde will lose at the ballot box," Diallo, head of the leading UFDG opposition party, told AFP in the capital Conakry.

The UFDG "felt it was best that in addition to the peaceful demonstrations against Alpha Conde's third term in office, to also fight at the polls against this third term. We can do both at the same time," said Diallo, 66, who had also contested the 2010 and 2015 presidential elections.

Diallo spoke shortly before the start of his party's convention to designate him as its representative in the October 18 vote.

Conde ended months of speculation on September 2 by confirming that he would be the Rally of the Guinean People (RPG) party's candidate.

Guinea's opposition vowed Tuesday to return to the streets.

The National Front for the Defence of the Constitution (FNDC), an umbrella grouping of parties, labour unions and civil society groups, has been campaigning against the constitutional revision adopted in March, which it has denounced as an institutional coup.

Under Guinea's constitution, presidents may only serve two terms. But according to analysts, the new constitution could reset the presidential term counter and enable him to run a third time -- a view now confirmed by Conde and the RPG.

Conde is a former opposition figure who was jailed under previous regimes in Guinea, a country rich in minerals but plagued by entrenched poverty and a history of instability.

Diallo, meanwhile, spent 10 years in the government of autocratic leader Lansana Conte and was prime minister from 2004 to 2006. In 2007 he became the head of the opposition UFDG party.

Diallo is the eighth candidate to declare his intention to run in next month's election. The deadline for filing applications to the Constitutional Court is on Tuesday at midnight.