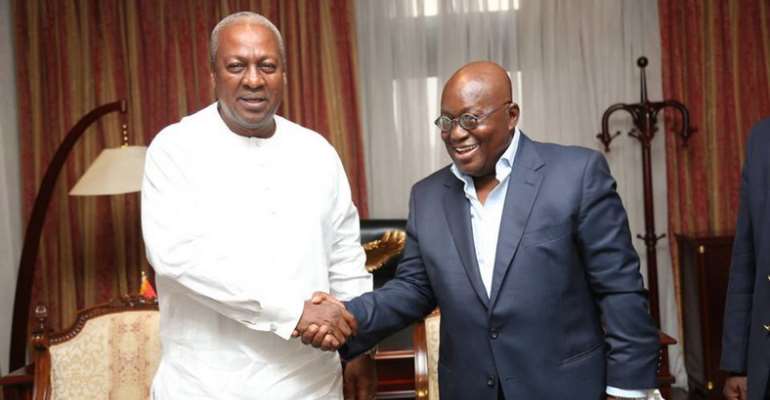 “Nepotism is the lowest and least imaginative form of corruption” – (Daniel Alarcon, Novelist) once said .

Many bullies are often cowards on the inside and it is only when their victims begin to show strength and stand up for their rights that the bully backs off and beats a retreat. This is true in school campuses, as well as in domestic and office environments, and in the political arena.

Nana Akufo-Addo is the longest serving presidential candidate and flagbearer of any political party in the annals of Ghana’s Fourth Republic having contested 4 presidential elections during the years 2008, 2012, 2016 and 2020. In 2016 Ghanaians fortuitously elected Nana Akufo-Addo as President of Ghana only for him quickly unfurl his true character and display the suppressed chameleon colors and will go down in history as the most ethnocentric, nepotistic, intolerant, vindictive, corrupt, incompetent and political bully ever to ascend the presidency of Ghana.

Today thanks to Nana Addo, Ghana’s past military leaders have suddenly been canonized and have become Saints in the eyes of rational Ghanaians, judging from the sporadic acts of violence unleashed by Nana Addo’s parallel militia forces of Invisible & Delta forces that have been embedded in National Security, and the iniquitous “compromised pro-NPP Courts” that are perverting justice and the “rule of law” thus making the hitherto PNDC Public Tribunals smell like a bed of roses in dispensing justice equitably and fairly.

Having compromised key state and public institutions with numerous crony appointments and appointments of persons more predisposed to bootlick and do the bidding of Nana Akufo-Addo and NPP, discerning Ghanaians no longer trust the Judiciary especially the Supreme Court to act as neutral arbiters to dispense justice and protect the fundamental human rights and freedoms enshrined in the 1992 Constitution of Ghana.

Many Clergymen and Religious leaders in Ghana by their persistent behavior, acts and conduct have also proven to Ghanaians that they lack the moral uprightness, moral standing and turpitude to proffer wise counsel or advice to citizenry considering their double standards and open bias on issues and matters of social and political relevance that they had better keep quiet and rather seek the face of God.

So it was that Nana Akufo-Addo perhaps exhibiting acute selective amnesia quickly summoned some Catholic Bishops to the Jubilee House to complain that former President John Mahama had had the audacity to call him and his family members “Akyem Sakawa Boys” in the wake of their second audacious and brazen attempt at raiding the public kitty in pursuance of their ongoing state capture agenda following the abortive PDS/ECG scandal and now Agyapa/Asaase Minerals Royalties.

“Nepotism is a disease which cannot be transmitted but can only be inherited” – (Abhinav Dwivedi, Indian Author)

Before the Catholic Bishops to whom Nana Akufo-Addo had cause to complain about the “Akyem Sakawa Boys” name tag, and also other Clergymen and self-righteous Social Commentators jump to the bandwagon to demand former President John Mahama to render an unqualified apology for the “Akyem Sakawa Boys” comment, I wish to refer them to the read the following archival news publications and in good conscience demand an apology from the person(s) who drew “first blood” before requesting John Mahama to do same:

It is now very important for NPP supporters to act to protect and safeguard their cherished “Yen Akanfuo” political franchise from Nana Akufo-Addo and his unelected family members in the persons of Ken Ofori-Atta, Gabby Otchere Darko, Nana Asante Bediatuo and Bumpty Akufo-Addo who in barely 4 years have diminished any commendable achievement that was delivered by former President John Agyekum Kufuor and replaced Kufuor’s legacy with unenviable records in corruption and thievery, nepotism, monumental incompetence etc. It is imperative for indigenes of Ashanti region who are arguably NPP presidential kingmakers to act now by reigning in Nana Akufo-Addo and his family and friends, if they do not want to see NPP become the first political party to serve for only one 4 year tem under the Fourth Republic.

“No one remembers how you got a chance, they only remember what you did with it” – (Steward Stafford)

To the rational supporters of NPP it is no longer the propaganda narratives and soundbites of incompetent and corrupt John Mahama and NDC, it is now the reality of incompetent and corrupt Nana Akufo-Addo and his family members and friends who through such corruption capers like PDS/ECG and Agyapa/Asaase Mineral Royalties have rightfully earned for themselves the accolade “Akyem Sakawa Boys”.