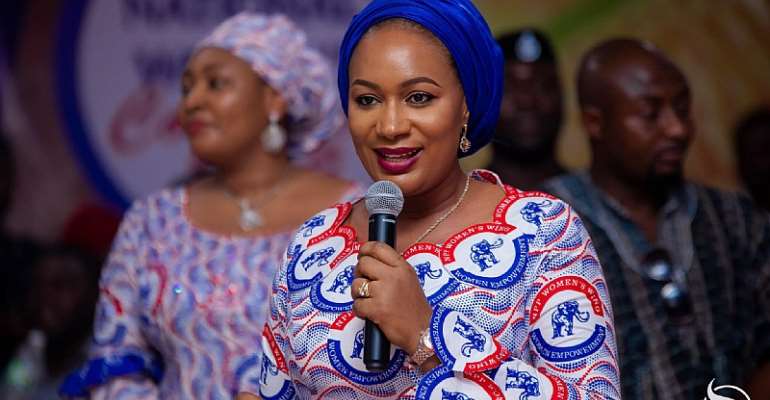 The wife of the Vice President, Samira Bawumia has said a vote for the opposition National Democratic Congress (NDC) in December will be an endorsement of the country's retrogression.

She has thus urged electorates not to repeat what she calls a mistake in bringing the NDC back to power since they were unable to solve the problems facing Ghanaians during their tenure in office.

While addressing New Patriotic Party supporters during the launch of the party's Women's Wing Campaign Committee in the Ashanti Region, Mrs. Bawumia urged them to work hard to increase votes of the NPP in the 2020 elections.

“This election is not about an individual, it is about our nation Ghana. It is not for you and me alone, it is about the future of Ghana. For the good job His Excellency Nana Addo Dankwa Akufo-Addo and my own Alhaji Dr Mahamudu Bawumia and the kind of work they have done and served Ghana, we have to consolidate our gains.”

Mrs. Bawumia cited the depreciation of the cedi, erratic power supply and economic hardship as some of the things Ghanaians endured under the NDC government.

She said: “God intervened and blessed us by giving us His Excellency Nana Addo Dankwa Akufo-Addo. So, we will not make that mistake again. We will not move backwards; we are moving forward.”

“By God's grace, we are winning and will win again. When a certain President came, he gave all Ghana's Bauxite to his brother, but President Akufo-Addo changed the narrative and he said he will let all Ghanaians benefit from Ghana's resources. If you don't want this, what do you want again? Although we don't have much of a problem in the Ashanti Region, just like the Regional Women Organizer said, more than 51% of the registered voters are women which means if the women vote, victory will certainly be ours. But we need a 100% turnout to let Nana Akufo-Addo win the elections”, she added.

First Lady, Rebecca Akufo-Addo had earlier said another four-year term for the Nana Akufo-Addo led administration and the New Patriotic Party is what is needed to transform Ghana for the better.

For her, the unprecedented achievements of the NPP in the last four years are evident enough for the administration to be endorsed for its second term.

The First Lady appealed to Ghanaians to renew the mandate of the current leadership for more progress.

“You have seen what Nana Akufo-Addo and the NPP are doing. You can see he is doing all the things he promised. That is why you have to vote for him again so he and the NPP can change Ghana for the better.”