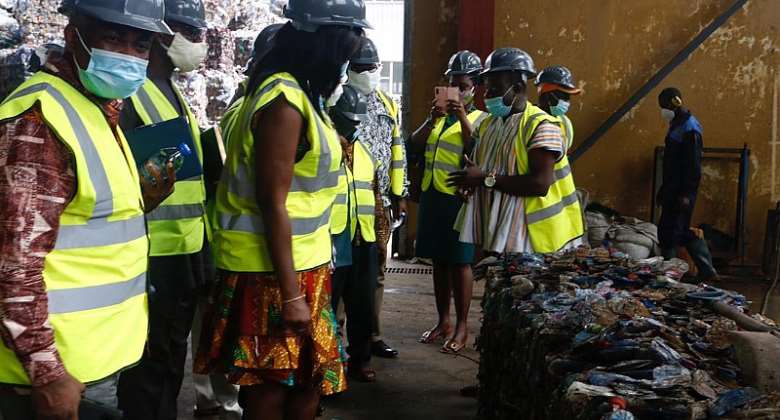 Organiser of the ACD, Michael Owusu Amoako, made the call when members of the association (mainly regional coordinating directors [RCD] of the sixteen regions in the country) toured some of the waste management plants of Zoomlion in Accra on Friday, September 4, 2020

The organiser of ACD, who was overwhelmed by loads of Zoomlion’s state-of-the-art waste plants, was full of praise for the company, and especially its efforts in helping to make the country clean.

The tour afforded the regional coordinating directors the opportunity to familiarise themselves with operations of the various waste treatment facilities.

It also formed part of RCDs’ annual review activities for the past ten years. And according to Mr Owusu Amoako, they chose Zoomlion because it was a giant in the waste management space.

Among the facilities they visited were the Integrated Recycling and Compost Plant (IRECOP) Limited along the Korle-Bu Mortuary road, Accra Compost and Recycling Plant (ACARP) at Adjen Kotoku, and Zoompak in Teshie.

They also stopped at the Sewerage Systems Ghana Limited, a subsidiary of Jospong Group of Companies, which manages both the Lavender Hill Faecal Waste Treatment Plant and the Mudor Waste Water Treatment Plant at Korle Gonno.

Such governmental support, which he said, was offered to private waste management companies across the world, will enable Zoomlion’s waste plants to operate at full capacity.

He also said it was imperative that the bye-laws on sanitation were enforced, calling on the various assemblies to ensure that every household owns at least two dustbins—one for plastics and other for other waste materials.

This, he said, would make sorting of waste easy, which will enable particularly his outfit to produce more compost.

According to him, ACARP has about two hundred (200) workers, insisting that should the central government extend its hand of support to them they can employ more workers.

“…and by employing more workers. we will be helping to reduce unemployment in the country,” he said.

Mr. Oteng took the RCDs round the various plants at ACARP. These included the Sorting Plant (primary sorting where heavy materials are sorted), the Rotary Screen, and the Magnetic Separator which separates all the metallic objects from the waste.

There was also the Air Separator that separates lighter materials from the bigger ones, composting plant, and shredding which grinds plastic materials, and then a Bailer machine.

He seized the opportunity to inform the RCDs of his company’s plans to commission the Kumasi Compost and Recycling Plant this month.