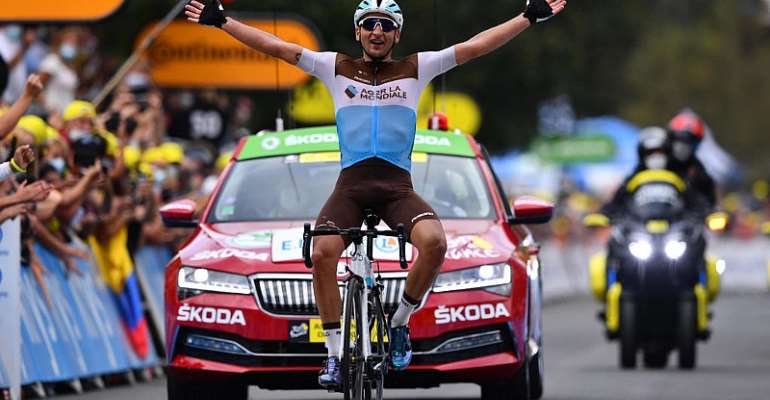 British rider Adam Yates held onto the overall race leader's yellow jersey after the first of two difficult stages in the southern Pyrenees Mountains. One of the pre-race favourites, Thibault Pinot, was left behind on the climb to Port de Balès.

This was the first day of climbing in the Pyrenees, and it produced the first real surprises of this year's Tour.

Not only did local hope Pinot drift inexorably backwards on the second-last climb of the day, defending champion, Egan Bernal of Colombia, appeared to be struggling on the final haul to the finish line.

Primoz Roglic and Nairo Quintana both seemed to be comfortable, but neither was risking any heroics.

Peters won a stage in last year's Giro d'Italia, but this is his first appearance in the Tour de France. He attacked with 9 kilometres to go on the climb to Port de Balès, the first out-of-category climb in this year's race.

In the overall standings, Adam Yates maintains his lead, but has dropped over 40 seconds to Slovenian rider Tadej Pogacar, and a handful to Frenchman Romain Bardet.

Thibault Pinot, who has been suffering with a back injury after a fall on the opening day in Nice, was struggling with 45 kms to go, and lost more than 7 minutes on his main rivals on the second-last climb. He trailed in more than 20 minutes down on the race leader.

European champion, Giacomo Nizzolo of Italy, is among those who have been forced to abandon the race in the course of today's stage.

Sunday's ninth stage will cover the 153 kms between Pau and Laruns, including the Category One climbs to the mountain passes at Hourcère and Marie-Blanque.

Alliance of CSO petitions Parliament for audience with GNPC ...
27 minutes ago