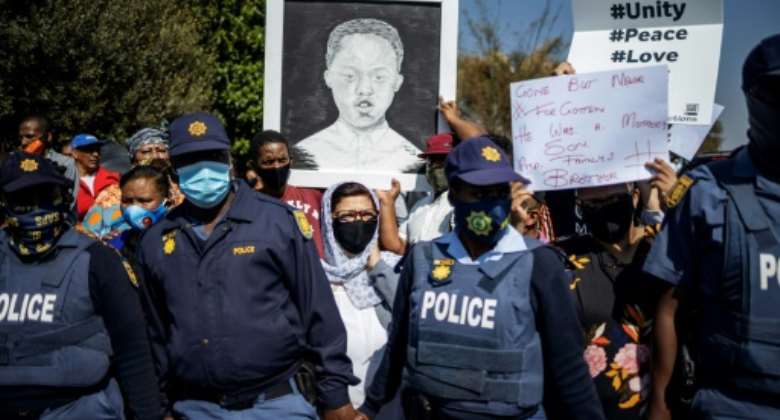 Dozens of mourners on Saturday attended the funeral of a disabled teenager who was allegedly gunned down last week by police, setting off protests against racism and police brutality across the country.

Nathaniel Julies, a 16-year-old with Down syndrome, was shot dead on August 26 near his home in Eldorado Park, a township ravaged by drugs and crime.

"We knew that Nathaniel would at some time have to pass, but not in that fashion," his uncle Cyril Brown told local television station eNCA.

His family said the boy, whose speech was impaired, was out to buy biscuits from a shop when he was shot by police on patrol.

Community members claim Julies was killed by police after they became frustrated with his responses to their interrogations.

The teenager's death sparked outrage in both Eldorado Park, south of Johannesburg, and around the country, renewing calls for tougher action against police brutality.

Nathaniel Julies' family carry his casket as hundreds of residents took to the street denouncing his death. By Ali Greef (AFP)

But Brown appealed to the community to refrain from rioting in protest.

"Today is about Nathaniel Julies, the justice will come after that," he said.

Three police officers have been charged in connection with the boy's death and will make their second appearance in the Protea magistrates court on Thursday.

Police presence was especially high during the funeral ceremony, increasing agitation among mourners.

"It's like a gangster is being buried here," bemoaned MP and opposition party leader Kenneth Meshoe who was in attendance.

"It is insulting and provoking."

Bridget Harris, the boy's mother, told mourners that she has forgiven the officers arrested in connection with her son's death.

Mankessim: 55-year-old kenkey seller knocked down by speedin...
58 minutes ago