We Have Peace, Dev't Under Akufo-Addo - Zabzugu Chief 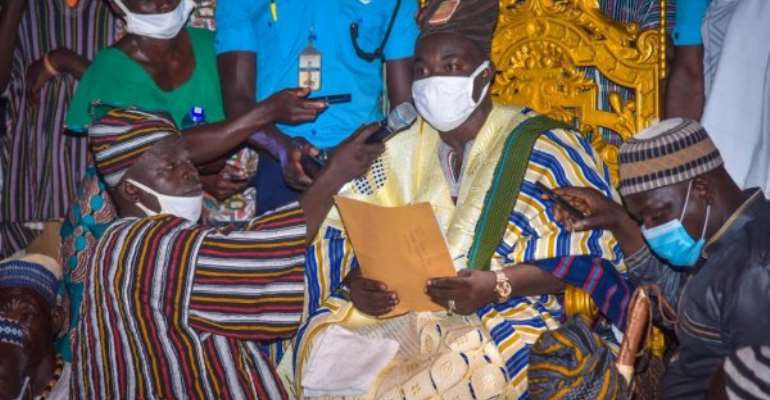 The Paramount Chief of Zabzugu, Yelzoli-Lana Iddrisu Imoro II, has expressed gratitude to the Akufo-Addo-led Government for the peace of Dagbon and infrastructural development in the area.

"Words cannot express our gratitude for the ongoing Zabzugu-Kworli road and construction of the storey building for the Zabzugu Senior High School as well as many other infrastructural projects," he said.

Yelzoli-Lana Imoro made these remarks at a durbar organised in honour of Vice President Mahamudu Bawumia at Zabzugu on Friday.

He said the peace and provision of massive infrastructure in the Zabzugu District over the past three and half years was enough testimony of government's commitment to developing the north.

"I wish to vehemently express our gratitude to President Nana Akufo-Addo and Vice President Bawumia for the lasting peace in Dagbon and the enskinment of the new Ya-Na and by extension the subsequent enskinment of the Yelzoli-Lana and other chiefs," he said.

Vice President Bawumia, on his part, reiterated the Government's determination to do even more to speed up development of the area and bridge the gap between the north and south.

"The Government of Nana Akufo-Addo is a government for all that is why we are spreading developmental projects evenly across the country. Everyone will get his fair share,” he said.

"We are a government that fulfills its promises and you can see the Free Senior High School Policy, One-Constituency One Ambulance, Planting for Food and Jobs, One District-One Warehouse and many more promises are being fulfilled.”

"That is why we are asking for four more years to do even more for you."

Your MMDCE list plagued by inequalities entrenched in the du...
55 minutes ago