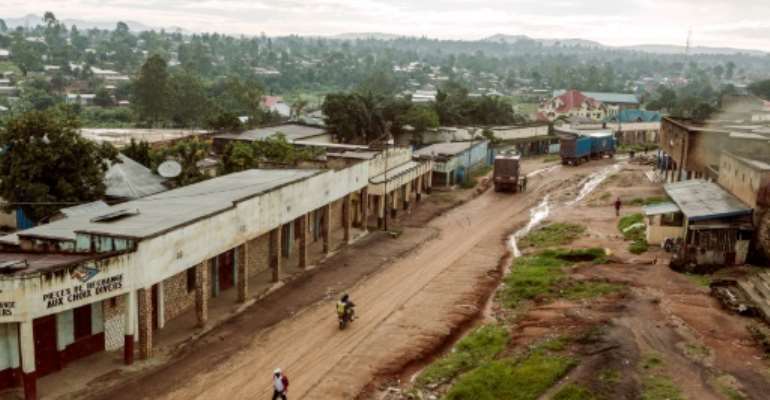 At a prison in Bunia, the capital of northeastern Ituri province, 17 inmates have died since April. By EDUARDO SOTERAS (AFP/File)

Hundreds of detainees die each year in severely overcrowded and unsanitary prisons in the Democratic Republic of Congo, which prison officials and NGOs say is largely due to a lack of food and medicine.

At a prison in Bunia, the capital of northeastern Ituri province, two inmates died this week bringing the total number of casualties there to 17 since April, according to the prison's director, Camille Nzonzi.

"We have 1,364 inmates, that's too many," she said. According to the United Nations, the Bunia prison was designed to hold 220 people.

"The biggest problem is the food shortage," she said. To make up for the prison administration's shortcomings, a local church has organised a food distribution.

Waiting for their next meal, standing close together in single file, the inmates have bloodshot eyes and show signs of malnutrition.

"We live poorly, we sleep badly, we don't take care of our health and we don't eat, two spoonfuls of porridge per person. Today, we are lucky, we had rice," said one detainee, Justin Titike.

At least 223 prisoners died in Congolese detention facilities in 2018, while 201 died in 2017, according to the United Nations.

"Congolese prisons are among the most overcrowded in the world," with an average overcapacity rate of 432 percent, Human Rights Watch noted.

The NGO sounded a new alarm in April, at the start of the outbreak of the new coronavirus, which affected about 100 inmates at the Ndolo military prison in the country's capital Kinshasa.

"The quantity of food is not even enough for a two-year-old child," said Augustin, a death row inmate in the northwestern town of Agenga in a report by the French NGO Together Against the Death Penalty (ECPM), published at the end of 2019.

"In most of the prisons visited, the inmates explained that apart from paracetamol and treatments for malaria and tuberculosis, there was no medication available," ECPM added.

"We wonder what the president thinks about this," said one inmate from Bunia's central prison, Justin Bangate.

President Felix Tshisekedi put the issue of "stock shortages of food and medicine" on the agenda of the Council of Ministers on Friday.

The president pledged to "personally ensure that every detainee can benefit from a treatment that preserves his life, physical and mental health, as well as his dignity."

I lied that you contracted covid-19, you didn’t also chop co...
36 minutes ago