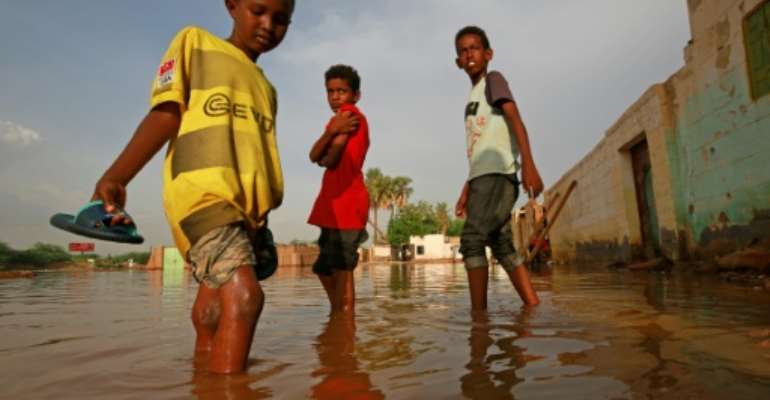 Sudanese boys make their way through a flooded street in the capital's twin city of Omdurman. By ASHRAF SHAZLY (AFP)

"A nationwide three-month state of emergency has been announced as Sudan is considered a natural disaster zone," the interior ministry said on social media.

Floods caused by more than a month of heavy rains have killed 99 people, injured 46 and left 100,000 damaged properties in their wake, one of the worst natural disasters in decades, according to state news agency SUNA.

North Darfur in the country's west and Sennar state in the south were among the hardest hit areas.

Heavy rains usually fall in Sudan from June to October, and the country faces severe flooding every year.

"The Blue Nile has reached an all-time high since records began more than a century ago," said the irrigation and water ministry last week.

The latest report from the United Nations Office for the Coordination of Humanitarian Affairs in Sudan said Thursday that over 380,000 people had already been "affected" by this year's floods.

The whole flooding season in 2019 affected 400,000 people, according to an OCHA spokesperson.