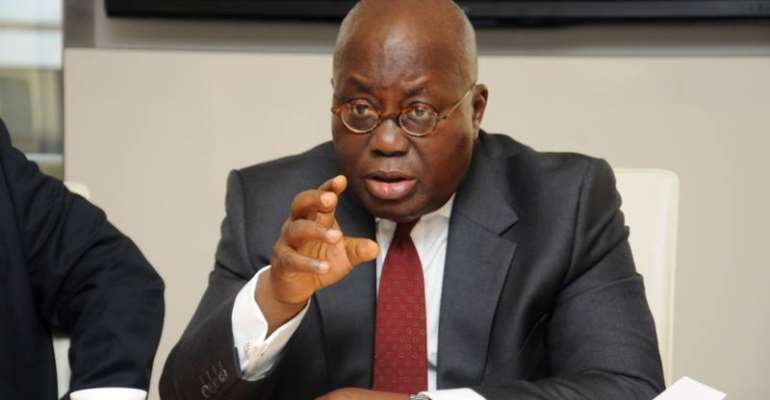 Mr President, I guffawed when I read the news item with the above heading published on Saturday the 5th of September, 2020 (see https://ghanaweb.com/..../Angry-Akufo-Addo-slams-Isaac-Adongo-s-Akyem-Mafia-Sakawa ). You were reported to have expressed your indignation (and rightly so) at the reference to your good self and some of your townsfolk as ‘Akyem Mafia’ and ‘Sakawa’ people by Hon Isaac Adongo (MP).

Mr President, it will interest you to know that some of us are vehemently against the use of indecorous language in our political space. That is why any reference to you and your townsfolk as “Mafias” and “Sakawa” people tastes like bile in our mouths. But the same way some of us condemn indecorousness, we equally condemn inconsistency and double standards. Mr President, were you not in Ghana when the term “Gonja Mafias” was coined, popularized and hurled into the Ghanaian political space? While I cannot argue that the author of the said article is loyal to you personally, and your party in general, I can say with some degree of confidence that it would have been nice for the then-candidate Akuffo Addo to have condemned in no uncertain terms the “ethnocentric tagging” of the Gonja people. Similarly, it would have been nice for the then-candidate Akuffo Addo to have used one of those engagements he had with the clergy to make the point that “that is the kind of language we don’t want in our politics.” And that call would have resonated with the consciences of the thousands of Gonjas who resented that tagging. But your silence over the tagging of Gonjas as “mafias” was rather deafening. Like Madam Elizabeth Ohene in her recent remonstrations of Civil Society Organizations, I put it to you that you were silent then because the shoe was on the other foot. And that is where the inconsistency and double standards lie.

When Gonjas were tagged as “mafias” during President John Mahama’s time, I know you were fully aware that unlike many other tribes in Ghana that can be argued to largely affiliate with a political party, Gonjas generally do not have strong loyalties to any party in Ghana. We go with whoever comes with policies and programmes that aim to deliver us from the shackles of Ghana’s most insidious enemy: poverty!!! That is true even with His Excellency John Mahama (a Gonja) as the candidate and leader of the NDC. That is why in the 2016 elections, you garnered a significant 20% of the votes cast in John Mahama’s Bole backyard. Gonjas are so politically open-minded that we even allowed you to effectively “infiltrate our camp” in Bole to plant the seeds of dissent and division in our highly venerated chieftaincy institution. Until some weeks ago, Bole was effectively acephalous and the institution of chieftaincy in Bole remained a poisoned chalice – thanks to your clandestine political machinations. We are so politically open-minded that you will find that the most vociferous critics of John Mahama are not just Gonjas, but Gonjas from Bole. Like many other tribes in Ghana, we are so politically open-minded that you will find that our political loyalties are embedded within all major political parties in Ghana. That is how we produced (in no particular order) the likes of:

Gonjas are therefore not a monolithic lot whose loyalties gravitate around a single individual – John Mahama. And yet when the shoe was on the other foot, you in your wisdom allowed the cacophony of “Gonja Mafias” to maturate. I assume you knew that while the tag of “Gonja Mafias” was popularized in NPP quarters over which you presided, there was no “tightly knit group” of Gonjas (or a “mafia”) around His Excellency John Mahama. I assume you knew that because you had a group of well-informed and attached-to-their-roots Gonjas like Samuel Jinapor and Dr Clifford Braimah who knew the gossips in Gonjaland and the remonstrations of Gonjas about the lack of “proper Gonja representation” in the Mahama Government. Indeed, there are still Gonjas who feel we sat by the banks of a metaphorical River Mahama and yet had had to wash our hands with spittle because Mahama was too careful about filling his government with his kith and kin. That feeling resonates within Mahama’s immediate family and in the wider Northern community. But that is another conversation. And yet, at no point during the name-calling and insinuations of “Gonja Mafias” did we hear or see now-sanctimonious President Nana Addo Danquah openly or otherwise condemn the tagging of the entire Gonja ethnic group.

Mr President, this leads me to the conclusion that while it is not a tit for tat game, “abaa a yɛde bɔ Takyi no yɛde bɛbɔ Baa”. If you had called your “boys” to order then, I’m sure we wouldn’t have been having this conversation today. Unfortunately, it looks like you will have to ‘manage’ with that “Akyem mafia” and Akyem “sakawa” tag for a while if not for anything but for the fact that “bɔɔfrɛ a ɛyɛ dɛ na abaa da aseɛ”.

More Opinion
ModernGhana Links
UK's decision to consider vaccinated Indians as 'unvaccinated' stinks of apartheid, lacks scientific merit
Kwame Nkrumah Holiday, A Complete Waste Of Time!
Dr. Nkrumah, A Quintessence Of Great Leadership
Nana Yaa Asantewaa Was Edwesohemaa, And Not “gyasehemaa Of Besease”
The State Of Democracy In Africa
Germany and its Neo-imperial quest
The Intractable Wrangling And Deepening Crisis Between The Topechelons Had Soared Exponentially In Somalia
Two Days To Go, And Enthusiasm Of NPP Registrants Target of 6.7million In Ghana Falls Below 10%
Kano-Maradi Rail Project: Amazing Piece of Wrong Journalism
TOP STORIES