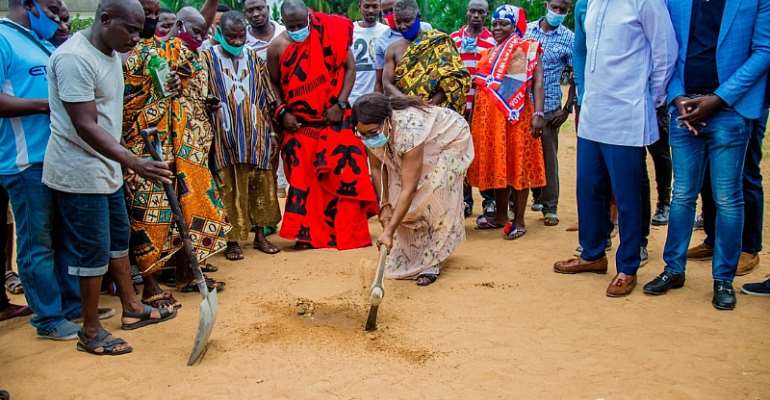 The project is being funded through the one million dollar one constituency program through the Infrastructure for Poverty Eradication Programme (IPEP) under the Ministry of Special Development Initiatives (MSDI).

The CEO together with the Member of Parliament (MP) of Agona West and Minister for Gender, Children and Social Protection, Honourable Cynthia Mamle Morrison paid a courtesy call on the Paramount Chief of Agona Swerdu, Nana Kobina Asiadu Botwe II to seek his blessings before the sod cutting ceremony. The Member of Parliament expressed her gratitude for their continuous support and stated that the astroturf which they requested for has finally been awarded for construction and the contractors are ready to commence works.

She also informed them that all bridges that were requested for by the people of Agona West Constituency have been constructed under her tenure, if there is any left unless those that have not been brought her attention.

The CEO of CODA, Lawyer Jerry Ahmed Shaib said the President promised Ghanaians that when he is voted into office he will allocate one million dollar per constituency to help in socio-economic development in every constituency in the country. He said in fulfillment of that promises are the results they are witnessing.

According to him, there are other ongoing projects like school buildings, CHPS compounds, drainages and others under the one million dollar per constituency programme. He also introduced the contractors as MSH Astro Gh. Ltd. and assured that all artisans who would be engaged to work during the construction would be recruited from the constituency which will serve as an employment for the youth. He further stated that the project would be completed by December 2020 for commissioning.

The Paramount Chief of Agona Swedru thanked the President for the unprecedented development he has brought to the doorstep of the Constituents. He also acknowledged the hard work of the CEO and the MP and advised them to continue with the good works they are rendering for the citizenry. Present at the chief’s palace were Nana Kojo Acquah (Tufohene), Omanpanyi Kojo Addo, Ebusuapanyi (Okanta), Nana Kobina Antsey (Secretary) and other traditional leaders.

Lawyer Jerry Ahmed Shaib and Honourable Cynthia Mamle Morrison also paid a courtesy call at the palace of Nana Attah Yeboah VII, Dabihene of Otabilkrom, the exact town where the astroturf would be constructed. The Chief and Elders poured libation and prayed for God’s protection and the successful completion of the project. The Chief on behalf of the people thanked the CEO and MP for bringing the astroturf project to their town. He also thanked the MP for the various roads being constructed in the township and also appealed for a road behind the palace to be constructed for them.

The next courtesy call was at the palace of Nana Okofo Katakyi Nyarko Eku X, the Paramount Chief of Agona Nyakrom. Honourable Cynthia Morrison explained that the astroturf project would commence immediately and prayed that the chief and people support the contractor in order to complete the project before the scheduled time. During the sod cutting ceremony, libation was poured and prayers were said for God’s protection and completion of the project.

The CEO of CODA promised to award contract for the construction of a drain that stretches alongside the park to enable free flow of water whenever it rains without causing damage to the astroturf. The Chiefs and people thanked the CEO and the MP for their continuous support and hard work. They also prayed for more developmental projects to be brought into their community.