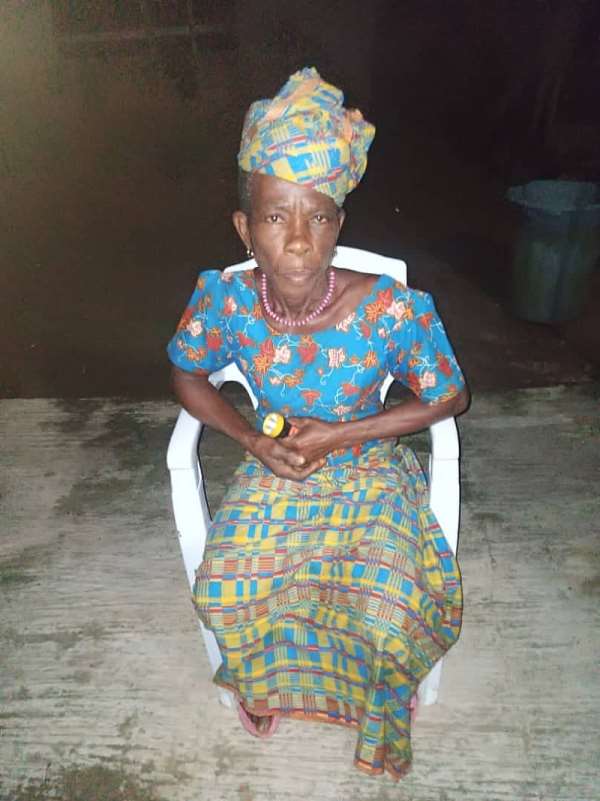 Another case of witch persecution is unfolding in Cross River state. I was attending an event in Lagos when the news reached me. A renowned Nigerian journalist, Funmi Iyanda, is featuring the issue of child witch persecution in one of her Public Eye episodes later in the year. She invited me for an interview at her Lagos studio in August. While at the dinner table with Barr James Ibor of the Basic Rights Initiative (Calabar), who was also featured in the program, his phone rang. I overheard a woman at the other end of the phone urging him to intervene in a case of witch persecution in one of the communities in Cross River state. An alleged witch was about to be murdered. I asked him to link me to this local advocate, which he did. I could not speak with the lady that evening. I asked her to forward photos of the victim to me. The following day I called the lady, and she told me that some youths in the community were about to murder an elderly woman, after accusing her of witchcraft. The contact person sent me a text summarizing details of the case:

“The sister’s children and her children have sent her out of the house that she built. When she came to Akamkpa, she bought a piece of land, erected a building, and invited the brother and sister to live with her. Today, they are saying that she is a witch. They have sent her out of the house that she suffered to build with the husband, beating her and saying that she is a witch, that she killed her children. This woman trained her sister’s daughter, who later died, and they said that she killed her niece. Now her sister has been sick for a long time. They did not allow her to go and see the sister at the hospital. The sister had HIV/AIDS, but they refused to tell people. Now she later died, and they claimed that she was responsible for her sister's death and that she too must die. They said that it was a prophet that said she was a witch. They sacked her from the house that she suffered to build with her husband. Some of her children who are with her have also been sent out. The case is with the police and, also in court. The woman has no money to hire a lawyer. Any place that she tries to take refugee, the children would go there and cause trouble and ask them to send her out or kill her."

I inquired to know more about the case, but the local advocate told me to contact one of the woman's sons, the only child who has been defending and supporting her.

I tried speaking with the victim's son on several occasions without success. Some days later, I was able to speak with him, and he confirmed the story as recounted by a local source. Some of the siblings suspected the mother of witchcraft and in August they abducted her and took her to a nearby bush to kill her. But the police and the youth leader intervened. The woman was rescued and taken to the police station. He gave me the phone numbers of the police officer and the youth leader who helped to rescue the mother. I called the youth leader the following day, and he confirmed that he helped save the alleged witch from being murdered. He noted that the woman had on several occasions been suspected of having occult powers and using them to cause harm, diseases, and death in the family. Some family members had reported her to the Akwa Ibom community in the area, and they asked the family to contribute some money, 100, 000 Naira (250 dollars), so that they could go and do some findings, and ascertain if the woman was a witch. And the family could not afford the money. And during this period, an old woman died in the compound. The children of the deceased and some of the children of the alleged witch went and abducted her and took her to a nearby bush to kill her. One of the sons contacted the police, and a police officer phone the youth leader in the community. The youth leader reached out to the abductors and prevailed on them. The alleged witch was eventually released and taken to the police station. The youth leader said that when they brought her out from the bush, the alleged witch had a machete cut on the left hand. They also hit her on the left eye, and she had some bloodstains on her clothes. The son said that the abductors robbed the mother and took the money in her possession.

I rang up the police officer who confirmed the story. He said that he was the Investigative Police Officer that handled the case. But he refused to make any further comment on the issue. He told me that the matter had been charged to court and would be coming up for hearing on September 18 at the Magistrate court, Akamkpa. A local contact told me that witch persecution in Akamkpa and that alleged witches were often attacked and beaten. That when people are persecuted for witchcraft, nobody used to come to their support. Meanwhile, there is tension in the community since the police intervened, and the case was charged to court. Those who tried to provide shelter for the accused had been attacked and beaten. The Advocacy for Alleged Witches (AFAW) is in touch with the victim and the son. AFAW has provided some funds for her to rent an apartment while her case is being processed in court. Those who believe in witchcraft need to be educated and enlightened. They need to realize that witchcraft is a form of superstition. The notion that some persons could harm others through occult means is baseless and mistaken. Allegations of witchcraft are rooted in a lack of understanding of nature and how nature works. The police in Akamkpa must be commended for intervening in the matter and for rescuing the alleged witch from her bloodthirsty relatives. Now the police should work with community leaders to ensure that the woman suffers no more harm or attack. Those who tried to murder her would go to any length to evade justice. It is now left for the court to diligently process the case, and ensure that justice is done.

Mahama was disastrous in managing Ghana’s education — NPP’s ...
55 minutes ago