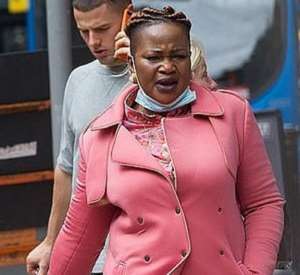 A cleaner blew £31,000 after bungling shop staff accidentally transferred more than £90,000 into her bank account.

Comfort Konadu, 52, had returned a £9 item to a charity shop but it is believed staff added five noughts while entering the electronic credit note into the bill.

Once she realised the error, Konadu transferred £57,000 into other accounts including those of her family.

Officials at the Royal Mencap Society quickly discovered the error but only managed to retrieve two thirds of the missing money.

It is believed the charity, which helps people with learning difficulties, will now be liable for the loss because it was caused by human error.

Two workers at the charity were suspended and subsequently dismissed over the mistake.

At Manchester Crown Court Konadu, who has six children and 12 grandchildren, admitted theft and was sentenced to 15 months in prison, suspended for two years.

She will now face a Proceeds of Crime hearing where she will be expected to return the outstanding £31,000 – which represents 18 months worth of profits for the charity shop. It is not known what the cash was spent on.

The incident occurred after Konadu went the Mencap shop in Openshaw, Manchester, on October 11 last year to get a refund for an item she had bought.

The following Monday senior managers at the charity were alerted to the large refund and contacted staff at branch who said there had been an ‘issue with the machine’ and £90,047.19 had been transferred to Konadu’s account in error.

The court heard the money had already landed in Konadu’s account on October 14 and that same day, she transferred out more than £57,000 to different accounts including one belonging to her son.

Inquiries showed £57,722 was transferred into at least two bank accounts.

The charity managed to quickly get back £40,000 of the missing money but some of the cash went through a number of different bank accounts.

Kate Gaskell prosecuting said: ‘Once the money was in there it would have been very obvious to her that that money should not have been in her bank account.

‘What followed was a flurry not only to her bank account but to her friends and family’s accounts as well.

‘The debit went in and was processed on October 11, but it was the weekend and it appears that the money doesn’t actually lend till October 14.

‘Thereafter on the same date October 14, all the financial activity takes place. On October 15, remaining £40,000 is frozen quickly and taken back by Barclays Bank. ‘

Konadu, of Openshaw, claimed she had been expecting £12,000 into her account from another source and said at first she assumed the transfer was legitmate.

She said when she was realised it was higher than expected she had tried to raise the issue with her bank.

But inquiries revealed she did not inform the bank or the charity about the botched transaction.

In mitigation defence counsel Max Saffman said: ‘She has some family who live in this country and some who live in Ghana were some of the money went.

‘Until this windfall she was leading a very very modest lifestyle and she is a hardworking lady the vast majority of the time.

‘The money was more than she could ever have dreamt of and temptation got the better of her.’

Sentencing Judge Nicholas Dean QC said: ‘This was an unexpected windfall that the defendant took advantage of.

‘She must have realised this was an error. It would be very different if she had somehow contrived to obtain credit in the first place.

‘That’s not the case and she fell prey to the temptation to use the money she knew perfectly well wasn’t hers.’

He added: ‘Her average bank account would have been relatively low credit balance.’

He told Konadu: ‘You received a credit into your account of over £90,000 and you realised straight away that an error had been made.

‘You immediately should have reported it to both to your bank and to Mencap that the credit had been lodged in your account in error.

‘If that had occurred you would not be guilty of any dishonesty and they would not have suffered any loss.

‘If you deliberately involved yourself in securing this transfer you would now be facing an immediate sentence of imprisonment.

‘But this was an unexpected windfall into your account and you fell prey to temptation and acted dishonestly.

‘That is out of character for you and you have brought on yourself great shame and dare say a very great deal of anxiety.

‘You transferred out of your account over £57,000 which you knew wasn’t yours. Perhaps you will be able to assist in recovering some of that but I know not?

‘This was a serious amount of money and a serious offence which must be met with a sentence of imprisonment but you are a person of good character and the money came to you unexpectedly in error.

‘You leave this court with a stain on your character and in my judgement that is going to be considerable punishment as you have brought shame on yourself and dare I say your family.

‘I’m confident you will not re-offend as you are in normal circumstances a hard-working individual.’