Fears for Congolese Nobel laureate Mukwege amid tensions with Rwanda 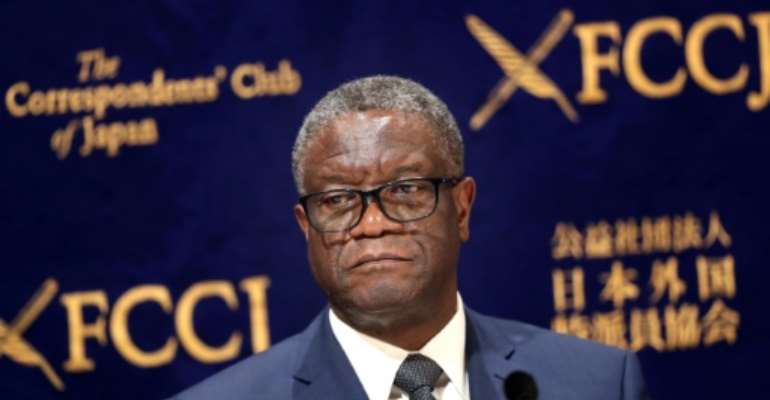 Mukwege is respected the world over for his pioneering work. By Behrouz MEHRI (AFP)

Nobel peace laureate Denis Mukwege has become embroiled in tensions between his native DR Congo and neighbouring Rwanda, leading to growing calls for his protection following a series of death threats.

Mukwege, a gynaecologist who shared the Nobel Peace Prize in 2018 for his work against sexual violence in war, said in late July that he and his relatives had been threatened following a tweet condemning the massacre of 18 people in the DRC's South Kivu province.

Mukwege's tweet linked the violence back to the start of more than 20 years of war in eastern Congo which began with the 1996 invasion of the country by rebels backed by neighbouring Rwanda, Uganda and Burundi.

Without mentioning who the attackers were, he tweeted: "These are the same ones who are still killing in the DRC."

The comments, as well as his campaigning to publicise a 2010 UN investigation into possible war crimes committed in Congo by rebels and foreign forces, have raised hackles in Rwanda.

In mid-August, influential former Rwandan defence minister James Kabarebe, who commanded Rwandan troops in Congo in 1996 and 1998, dismissed the UN report as "propaganda" and said Mukwege was "a tool being used by families of those who lost the war."

On Friday, hundreds rallied in the capital Kinshasa to ask the DRC government to expel the Rwandan ambassador and protect Mukwege, while others demonstrated in Mukwege's home town of Bukavu on Thursday.

"We want justice and compensation for all the acts that Rwanda has committed in Congo, for all the massacres that have taken place," a demonstrator, Heritier Masingeni, said before the rally in Kinshasa was broken up.

A protester held up a placard saying: "Hands off our Nobel laureate!"

Amnesty International said in a statement on Friday that "the government of the Democratic Republic of the Congo and the United Nations must take urgent and concrete measures to protect Denis Mukwege."

Mukwege, who has been criticised recently in pro-government Rwandan media, has escaped several assassination attempts in the past and has been guarded by UN peacekeepers since returning from exile in 2013.

"His life seems to be at serious risk," the United Nations rights chief Michelle Bachelet said in a statement last week, calling for an impartial probe into the threats against him.

The 65-year-old, nicknamed "Doctor Miracle", was awarded the Nobel Prize for his decades of work treating women who have been raped during the country's more than two decades of conflict.

His insistence that the perpetrators of war crimes in Congo should face justice is highly sensitive in the region, particularly in Rwanda, where President Paul Kagame has held power since the genocide there in 1994.

The First Congo War in 1996 involved regular troops from Rwanda, Uganda and Burundi.

The Second Congo War from 1998 until 2003 involved a dozen armies from the region, 30 armed groups and two main rebellions: one in the east supported by Rwanda and another in the north backed by Uganda.

"General Kabarebe has not uttered a single threat. He finds that there there are too many far-fetched accusations in this report," Rwanda's ambassador to Kinshasa, Vincent Karega, told AFP on Friday.

The report in question -- the UN's 2010 Mapping Report -- documented 617 serious violent incidents between 1993 and 2003, saying they could amount to war crimes, crimes against humanity and genocide if investigated and tried in a competent court.

Rwanda has always rejected allegations that its forces committed war crimes in Congo.

Mukwege has called for Rwanda "to own up to its acts," referring in particular to clashes in 2000 between Rwandan and Ugandan troops on Congolese soil which left many civilians dead.

A/R: Journalists on tour with Regional Minister involved in ...
16 minutes ago

Focus on promoting human rights, be swift and fair in applic...
18 minutes ago