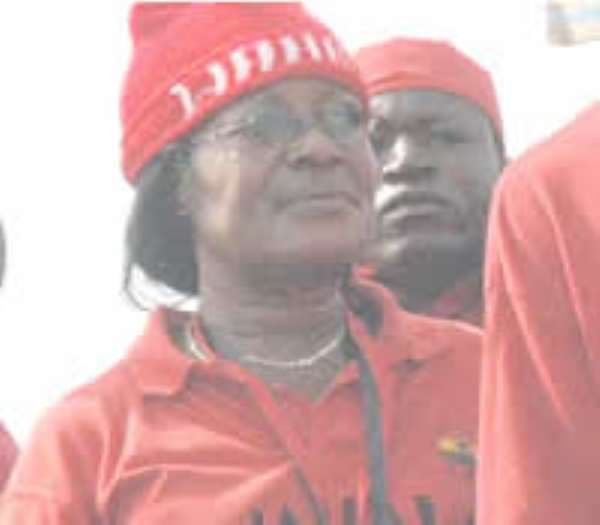 Mr. Joe Donkor, the Gomoa West Chairman of the New Patriotic Party (NPP) who served also as the National Democratic Congress (NDC) head in the constituency has descended on Madam Ama Benyiwa-Doe, describing her as an ingrate and liar on whom he spent over ¢130 million to enable her win her seat.

The two political figures turned the newspaper review segment of the Adom Fm, a Tema-based radio station into an arena as they traded accusations.

Mr. Donkor who was recently made the Gyasehene of his town, in his attack on the woman with whom he was once in the National Democratic Congress (NDC) and who once served as the MP for the Gomoa West constituency before he decamped to the NPP, said he changed party because of her.

Not amused by Ama Benyiwa Doe's integrity, he recalled how, after the 2000 general elections, the woman who is as well the National Women Organiser of her party, approached her with a proposal to dispose of her campaign pick-up.

Continuing, he said a white man expressed interest in the deal but this had to be preceded by the changing of tyres and servicing of the vehicle.

After ensuring that the foregone demands were met, the white man went to the Driving and Vehicle Licensing Authority (DVLA) to carry out some checks on the vehicle when he discovered that the pick-up did not belong to Ama Benyiwa Doe but to the NDC.

Upon this realization, the white man, Mr. Donkor asked for the necessary transfers to be made before payment was effected.

This he added, did not go down well with the NDC personality who demanded that he (Donkor) sign an undertaking to pay C40 million being the cost of the car.

In his absence, one day, he said Benyiwa-Doe led two macho men to his house and harassed his wife and children, a situation which compelled him to pay the ¢40 million.

The payment of the ¢40 million notwithstanding, she failed to replace the tyres, the garage fees and the servicing cost of the vehicle.

In her response, Madam Benyiwa-Doe said at the time that she disposed of the vehicle it was on wheels, having been used for the campaign only.

Continuing with her defence, the NDC Women Organiser stated that Mr. Donkor wanted a transfer before paying for the vehicle but she insisted on receiving the money first, pointing out that, she kept the car for two weeks. “That was why I was made to sign the undertaking,” she said.

She denied harassing his wife and children because according to her, Mr. Donkor had macho men in his house.

The NDC strong woman charged him of dilly-dallying with the payment of the money. “For more than two weeks, he kept tossing me and denied me entry into his house,” she said.

When she finally entered the house, she insisted on taking her money. On the day she went to his house, she did so in the company of her son and not macho men.

On Joe Donkor's contribution to the NDC, she stated that the party did not know him until towards the 2000 elections when he started brining T-shirts to the party and not to her.

She said she did not need his contribution to win the election because after all, she had been an MP and a minister.

According to her, Joe Donkor, along the line had complained that under the NDC, his business was not running smoothly, so when the party lost the election, he left and joined NPP.