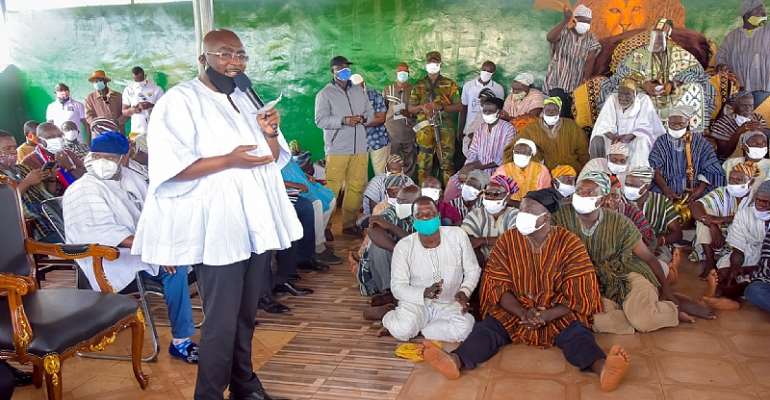 Vice President, Mahamudu Bawumia has asked the people of Dagbon to vote for President Akufo-Addo as a reward for bringing peace to the area after protracted conflict lingered for years.

Dr. Bawumia says the restoration of peace in Dagbon should be seen as a major achievement of the New Patriotic Party (NPP.

The coronation of the new Yaa-Naa Abukari Mahama II on January 25, 2019, brought to an end nearly two decades of conflict in Dagbon over the skin after years of mediation.

The conflict dates back to when Yaa-Naa Yakubu Andani II was murdered in March 2002 after an eruption of violence during the Yendi traditional fire festival.

Speaking at a meeting with the overlord of the Dagbon traditional area, Yaa-Naa Abukari Mahama II, Dr. Bawumia called on the Dagbon land to fulfil the perceived obligation and vote for the NPP.

“The Dagbon people, the Northern people and Ghanaians as well are indebted to Nana Akufo-Addo for bringing peace to Dagbon and once you owe somebody a debt, you should pay it,” the Vice President said.

“The people of Dagbon will pay that debt on December 7 by voting massively for him and the NPP government,” he added.

As part of his address, Dr. Bawumia also promised an upgrade of the Yendi Airstrip.

“At the National Security Council meeting, the president agreed that we are going to have the resurfacing of the Yendi Airstrip.”

He also assured the Overlord, Paramount Chiefs and their subjects of “President Akufo-Addo's desire to ensure the development of the northern part of Ghana, having demonstrated his commitment with development projects across all parts of the north.”

Your MMDCE list plagued by inequalities entrenched in the du...
38 minutes ago