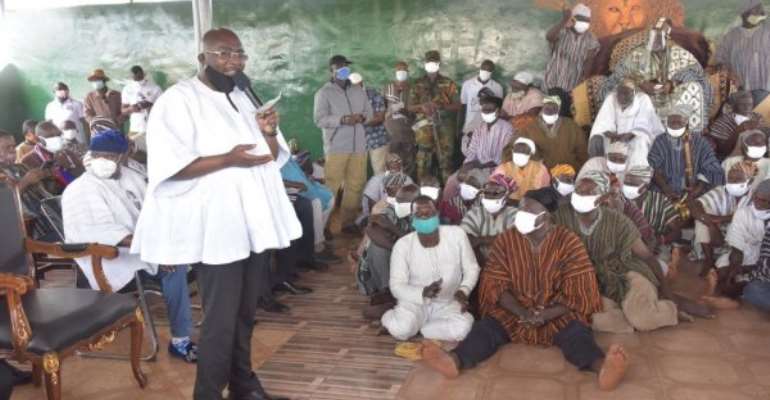 Vice President Dr Mahamudu Bawumia has hinted that Government intends to upgrade the Animal Health and Production College at Pong Tamale in the Savelugu District of the Northern Region to University of Agriculture.

This, he said, would promote the study of agriculture which is the mainstay of the people in the area and build their capacity towards boosting agriculture production.

Vice President Bawumia made this known when he paid a courtesy call on Yoo Naa Yakubu Abdulai Andani at his Palace in Savelugu.

The Vice President emphasised the importance of agriculture to the country's development, stating that upgrading the College would make a significant impact in the lives of the people in the area.

“The Akufo-Addo government intends to upgrade the Pong Tamale Agriculture College to a university to help promote the study of agriculture at an advanced level which will directly impact positively on food production among others,”Dr Bawumia stated.

It is expected that the successful upgrading of the Pong Tamale Animal Health and Production College would bring to two the number of public universities in the Northern Region.

Currently, the only public university in the northern part of the country is the University of Development Studies (UDS).

The Pong Tamale Animal Health and Production College was established in 1922 at Tamale by the British Colonial Administration, with the intention to increase the health of livestock.

Unfortunately, in 1925, the school was closed down due to funding challenges.

In 1960, the College was reopened in Pong-Tamale and named Animal Health and Production College.