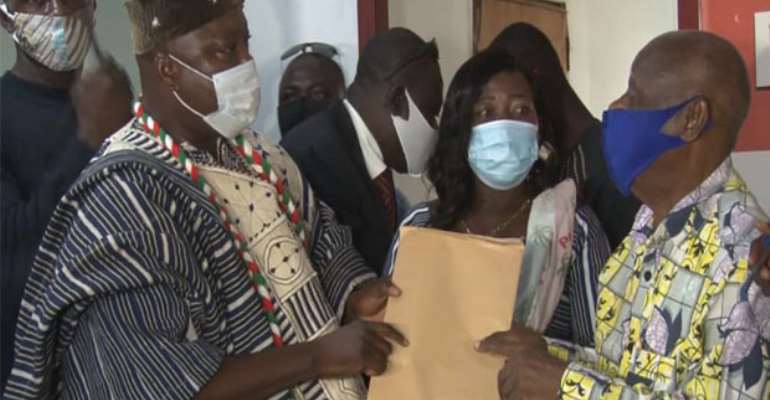 Samson Asaki presenting his form to the party.

The Executive Secretary of the Importers and Exporters Association of Ghana in Tema, Samson Asaki Awingobit, has filed his nomination form to contest the flagbearership position of the People's National Convention (PNC).

The 2008 parliamentary candidate on the ticket of the PNC in the Ashaiman Constituency was met by several party supporters who were clad in their party colours at the PNC Headquarters in Accra.

Mr. Awingobit presented his filing fee of GH¢20,000 attached to his nomination forms to the party's leadership, who commended him for his commitment to improve the fortunes of the party.

Speaking to the media after his submission, Mr. Awingobit called on Ghanaians to give the PNC a chance in the December 7 elections “to enjoy unprecedented policies” expected to be rolled out by the party when it assumes office.

He said the PNC was dedicated to the peace and stability of the country and would play a role to continue to consolidate the democratic gains.

He said when he is elected as the flagbearer for the PNC, he would groom “more and strong communication teams in the PNC” which would help sell the party and move it to the next level.