By Nick Perry and Cyril Belaud 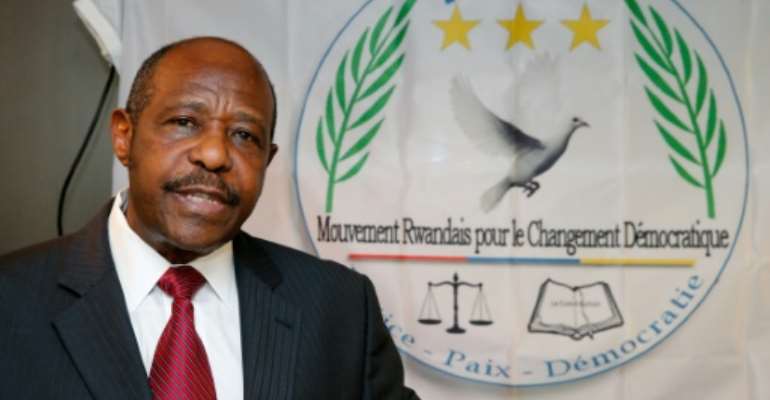 Rusesabagina was hailed a hero over his actions during the genocide that killed some 800,000 Rwandans. By NICOLAS MAETERLINCK (BELGA/AFP/File)

The shadowy arrest of Paul Rusesabagina on terrorism charges has thrust the polarising "Hotel Rwanda" hero back into the spotlight and underscored what analysts say are the lengths Kigali will go to silence its critics.

Rusesabagina, who became the most famous Rwandan in the world after the Hollywood blockbuster, but became increasingly hardline as he called for his government's overthrow, surfaced in Kigali this week shackled and accused of financing rebels.

His family says Rusesabagina, who had been living abroad since 1996, would never voluntarily return to certain prosecution in Rwanda, where he is seen as a traitor and accused of questioning the genocide.

They say he was kidnapped by President Paul Kagame's Rwandan Patriotic Front (RPF), which has ruled the East African country since 1994 and pursued what observers say is a muscular campaign to crush opposition voices -- wherever they may be.

"The RPF is very effective at maintaining control, even outside the country," said Timothy Longman, professor of political science and international relations at Boston University, who first met Rusesabagina in the mid-1990s.

It remains unclear how and where Rusesabagina was detained.

Rwandan authorities are tight lipped, saying only that "international cooperation" was involved.

His niece and adopted daughter, Carine Kanimba, said Rusesabagina was in Dubai for meetings before suddenly being paraded handcuffed in Kigali. Police in Dubai declined to comment to AFP.

"I don't know how he got to Rwanda. I read reports that he got on a private plane... however he would never have done that by his own free will, because he knows that in Rwanda they want him dead," Kanimba told AFP.

Rusesabagina, in the only interview since his arrest, told regional newspaper The East African in brief remarks that he was being treated well but refused to discuss the mysterious circumstances of his arrest or the charges against him.

Rwanda has a long history of reaching its enemies. In 2014, an exiled Rwandan spy and Kagame critic was found strangled in a Johannesburg hotel room in a murder South African prosecutors linked to Kigali.

Rusesabagina now holds both Belgian citizenship and a US Green Card.

The United States, which awarded Rusesabagina the Presidential Medal of Freedom in 2005, has demanded he be given a fair trial.

Belgium has said only it is "following the case closely".

In Rwanda, vocal supporters of the soft-spoken hotelier who sheltered more than 1,200 during the 1994 genocide are in short supply.

Longman said the regime in Kigali was skilled at quashing narratives contrary to their own and rallying their countrymen against opponents.

'Enemy of the state'

"The government has decided he is an enemy of the state, and he is not a hero, and everybody else has to fall into line," he told AFP.

Rusesabagina, a moderate Hutu, became disillusioned with the Tutsi-dominated RPF after its troops flushed out the genocidal regime and ended the slaughter that left some 800,000 Rwandans dead.

He accused the RPF, particularly its leader Kagame, of authoritarianism and anti-Hutu sentiment as the new regime violently consolidated its power in the aftermath of the genocide.

He left Rwanda in 1996 along with other moderates who believed the space for political opposition was fast shrinking.

But the release of the Oscar-nominated film "Hotel Rwanda" in 2004 gave him a new global platform to thunder against Kigali, and he soon came under relentless attack, with supporters of the regime shouting him down at speaking events all over the world.

Survivors groups accused him of profiting from their misery and embellishing his heroics. They pointed out that he charged guests for rooms as they sought refuge, and suggested he wasn't the altruistic saviour portrayed by American actor Don Cheadle.

Longman said as the hounding intensified, Rusesabagina's rhetoric became more extreme, putting off even some supporters.

He railed about Hutu oppression and more stridently against the RPF and the need to overthrow Kagame at all costs, including through armed struggle.

"The time has come for us to use any means possible to bring about change in Rwanda, as all political means have been tried and failed," Rusesabagina said in a 2018 video pledging support for the National Liberation Front (FLN), an armed group described as a terrorist organisation by Rwanda, and urging others to join.

Rwanda says Rusesabagina faces charges of murder, arson, kidnapping and terrorism, and accuses him of being a leader and sponsor of militia groups responsible for the deaths of civilians and soldiers.

"They are false accusations. They have not brought any evidence forward," Kanimba said.

"We think he was kidnapped because... our father has been a vocal critic of the Rwandan government for many years."

Longman said the charges could be well founded, but cautioned that Rwanda routinely used the courts to smear and silence its opponents.

"We don't know the facts. But arresting him abroad, and bringing him back by extraordinary rendition, is pretty remarkable," he said.

Rwanda has long been championed abroad as a success story and Kagame as a visionary who rebuilt his shattered country, and Longman said it would weather any criticism.

"It will bounce off them like water off the back of a duck," he said.