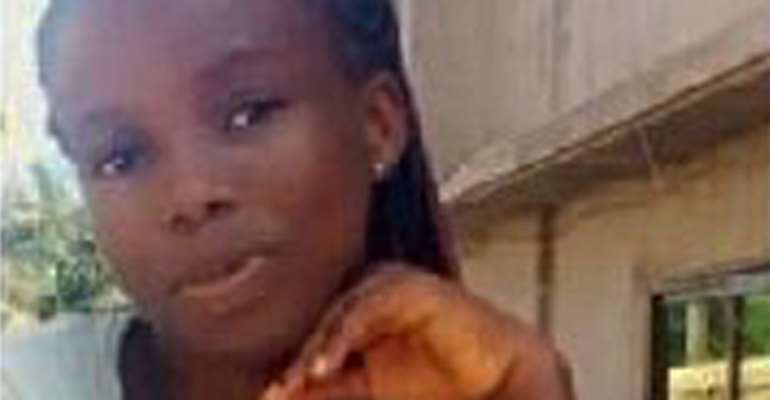 A sister of one of the Takoradi girls that were kidnapped and later killed has said she heard her sister screaming on the telephone the kidnappers used to contact them.

Rita Quayson, who is the fifth prosecution witness in the case of kidnapping and subsequent murder of four Takoradi girls, told a Sekondi High Court on Wednesday that her younger sister, Ruth Love Quayson, whom DNA results conducted by the police showed she is dead, had begged her family to find GH¢500 for the kidnappers for her to be released.

She told the court presided over by Justice Richard Adjei-Frimpong that her sister was kidnapped on December 4, 2018 and when she was not being found, the kidnappers used her sister's mobile phone to call their mother to inform her that Ruth Love had been kidnapped.

“My mom gave the phone to me, so I was the one who spoke to her. She told me the kidnapper was demanding GH¢500 ransom. My sister was crying as she spoke,” the witness narrated.

She said on December 4, 2018 around 9:30 a.m., she was with her mother when Ruth Love left home for the MTN office at the Takoradi Market Circle.

She said her younger sister told them that a friend had called her that there was a job vacancy at MTN and so she was going for that job.

She said Ruth Love went out with her friend, Stacy, who is a next-door neighbour at Diabene, near Takoradi.

She said around 1:00 p.m. same day, Ruth Love called their mother to inform her that she had been kidnapped.

She said the mother gave the phone to her (Rita) and after speaking with her younger sister, she asked for another sister of theirs, Rebecca Quayson, to go to the police station to report the matter.

“My mother also asked me to call our pastor who was already in Takoradi for a meeting. My sister and the pastor met at the police station and made the report,” she said.

According to Rita, when Stacy (Ruth Love's friend) returned, she indicated that before the two of them left for Takoradi, Ruth Love was charging her phone while she went to have her bath.

“Stacy said while Ruth Love was bathing, a number which was saved as Sammy N/F called several times and that while they were in a car going, the same number kept on calling so Ruth Love had to get down from the 'trotro' between a place called BU and Nkroful Junction,” the witness said.

She said later she went to give the police that information and a police CID called Ametepey asked that she should go to the police station with Stacy and so they went and Stacy gave her statement.

She said later in the evening, the one alleged to have kidnapped the sister called their mother again with Ruth Love's number and “because my mom's phone was put on loud speaker I could hear the kidnapper demanding more money before she would release my sister.”

“The person who called was a male. Immediately, I called Mr. Ametepey to inform him about all that the kidnapper had said. The CID told us not to send any huge amount and so I sent GH¢100 through my sister's MTN number on the instructions of the kidnapper,” she told the court.

The witness said the next day, December 5, 2018, early in the morning, “the kidnapper called my mother and asked for a GH¢10,000 ransom but my mother told him she did not have that amount and the kidnapper asked my mom to pay GH¢8,000.”

She said the CID explained that they needed a court order in order to get the call list on her sister's phone. She said later the CID asked for financial assistance to enable him to process for the court order and so he was given GH¢200.

Rita Quayson said the CID told them that when the kidnapper called again, they should tell the criminal the family was making the arrangement to get the money for him.

She said the order for the call list was delaying and so she sought the assistance of the BNI, who later assisted in getting the call list.

She noted that on the call list, some three numbers were consistent and so they gave it to the police for further investigations.

She said the following day in the afternoon, the kidnapper sent an SMS message which read, “You want to joke with us right?” and added that she had the message on her phone.

She said in the evening, the kidnapper sent another message which also read, “Your daughter is sick; you better pay so that she can come back home.”

She said the kidnapper followed it with a call and demanded the money again, and she recorded the conversation and sent it to the CID officer.

She said her phone developed a fault so she used the pastor's phone to call the kidnapper on her sister's phone and told him they were arranging to pay the money.

“So one Sunday, the kidnapper called the pastor's number and our pastor managed to send him GH¢500. So later, the police called to inform us that someone had been arrested in connection with the kidnapping.

“When we went to the Takoradi Central Police Station we realized from the accent that Samuel Udoetuk Wills who was arrested, was the one who demanded the ransom,” she pointed out.

She added that after the arrest, the call to demand ransom ceased but continued after the suspect escaped from police custody.

She said sometime in January 2019, the police made a discovery of skeletal remains at the uncompleted building at Nkroful, the same place where the prime suspect in the case, Samuel Udoetuk Wills, was rearrested.

She said later samples of her mother and herself were taken for the DNA test and also said that the Inspector General of Police organized a press conference in Accra and announced that the test conducted indicated that the skeletal remains belonged to the missing girls “including my sister.”

During cross-examination, the Counsel for the suspect, Mark Bosia, of the Legal Aid Board, asked the witness, “The first time you met Samuel Wills was at the Takoradi Police Station, right” and she answered in the affirmative.

He asked again “When you spoke to the alleged kidnapper, how did he introduce himself to you? The witness answered, “He only said he had kidnapped my sister.”

The lawyer asked, “What was so unique about the voice?” She answered “the person spoke broken Twi and English with a Nigerian accent and used the same accent when he was before the Takoradi Magistrate Court for causing damage and escaping from custody.”

The lawyer said to the witness “I suggest to you that the alleged kidnapper never spoke Twi in court and that it was your own opinion.”

The witness responded, “He spoke broken Twi and I have recorded his voice on phone.”

Your MMDCE list plagued by inequalities entrenched in the du...
56 minutes ago