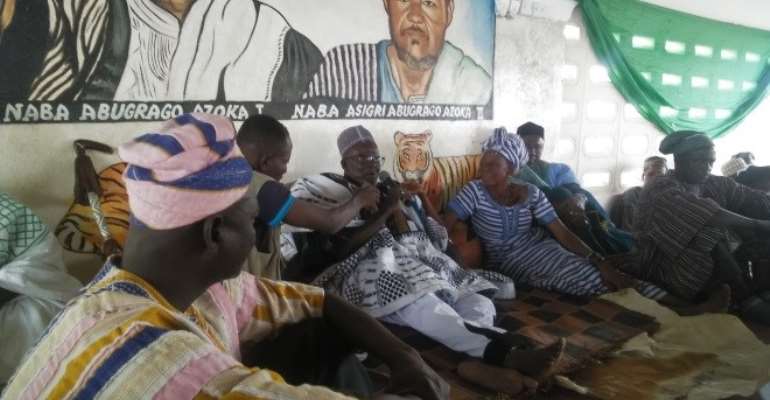 Bawku, Sept.3, Naba Asigri Abugragoe Azoka II, Paramount Chief of the Bawku Traditional Area in the Upper East Region has reiterated the need to adhere to education in the fight against allegations of witchcraft on innocent people in the Bawku traditional area and the country at large.

Naba Azoka noted that the Traditional Council has identified accusations by some self-claimed witch doctors that accuse innocent people especially the aged as witches and said such acts were unlawful and unaccepted in society.

Naba Azoka further explained that such acts has to be stopped, saying such accusers do not have evidence of proof to back their accusations and stressed the need for residence in the area to adhere to the programmes of the Ministry of Women, Children and Social Protection calling to educate the public against such practices.

Naba Azoka lamented that, in recent times, the Bawku Traditional Area has been bedevilled by strange cases of witchcraft; many of these cases were forwarded to chiefs’ palaces for attention while others were sent to witch doctors, such as the self-claimed newly established self-made spiritual monarchs whose houses became centers for divining to identifying witches.

In a press statement signed by the Paramount Chief noted that the most notable among such witchcraft centers is located in the village of widana, in the Pusiga divisional Area, and operated by one Rufai Sumaila, indicating that indeed witches camp got established near his father’s house where he resided.

According to Naba Azoka in the first week of August, 2020, a self-proclaimed witch who is alleged to have had encounters with the Widana witches center made outrageous allegations to the extent of implicating the paramount Chief and other chiefs in the area.

The statement disclosed that a self-proclaimed witch alleged that she had gathered monies from other colleague witches to the tune of fourteen thousand Ghana cedis (Ghc 14,000.00) which she personally presented to the Bawku Naba, in order to influence him to cause the arrest and prosecution of the person running the Widana Witches camp, Rufai Sumaila.

“Subsequently she alleged that two chiefs within the Pusiga zone were also wizards among other non-chiefs elsewhere in the Bawku area. This woman’s allegation went virile and has been recorded by many persons that could be produced for anybody who cares to listen”.

The paramount Chief explained that the need to end such inhuman act was paramount as the Ministry of Gender, Children and Social Protection has taken the lead to sensitizing the Ghanaian people against such evil practices that abuses human rights, indicating that on the 7th August, 2020 the Gender Ministry organized programmes where such practices were vehemently condemned by speakers of international repute, citing the case involving the recent lynching of a 90-year-old woman in Kafaba village in the eastern part of the Savanna Region of Ghana.

He said Chiefs and Religious leaders who are collaborating with the Ministry to end the menace had been implored to play a leading role in the fight against this canker in the Ghanaian society.

“The Bawku traditional council urged citizens of this traditional area to adhere to the programmes of the Ministry of Women, Children and Social Protection by co-operating to educate the public against the practice of witchcraft which is outmoded and unprogressive”. It added

“In Ghana today we work with laws and without adequate proof to identify people as witches and wizards would certainly create problems and land the accuser in trouble. In any case the allegations made by the self-proclaimed witch are false, malicious and mischievous. No one should take them serious.it is a figment of her imagination.” The statement added.

LGBTQ+ Bill: You're shameful backward thinker obsessed with ...
26 minutes ago