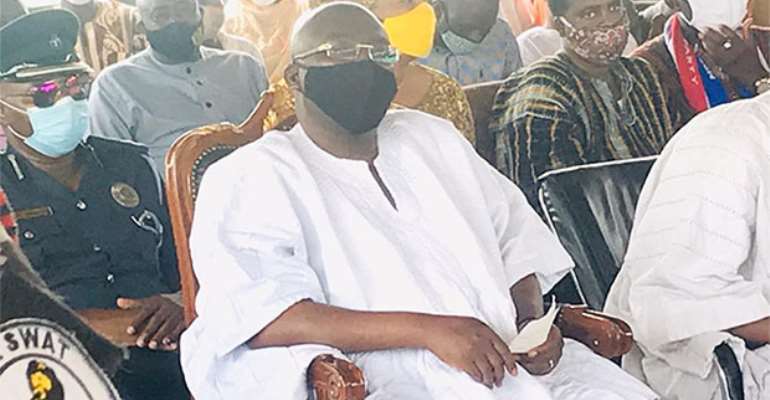 Vice President Dr. Mahamudu Bawumia has called on the people of Dagbon to vote massively for President Akufo-Addo and the New Patriotic Party(NPP) come December 7 for the restoration of Dagbon peace by the Akufo-Addo administration.

“ The Dagbon people are indebted to president Akufo-Addo for bringing peace to Dagbon and once you owe someone a debt you should pay and Insha Allah the people of Dagbon will vote massively for the NPP come December 7.”

According to him, peace was one that had eluded Dagbon and many governments for a very long time but President Nana Addo Dankwa Akufo-Addo against all odds said he would help in bringing peace and with the support of the eminent chiefs peace was brought to Dagbon.

Addressing the people of Dagbon at the Gbewa palace in yendi when he paid a working visit to the King of Dagbon, Ndan Ya Na Abukari II , he said former president John Mahama cannot be trusted with the Free Senior High School policy and for that matter should not be re-elected as president.

“ John Mahama cannot be trusted with the Free SHS because he said it wasn't possible then he said if he had Gh 2billion he wouldn't spend it on Free SHS so we don't think we can trust him with it .”

Dr. Bawumia said a new era of development has come to the North and its a development based on accomplishment.

“ The era of flying guineafowl to Burkina Faso is over it's an era of real development on the ground in every district .”

The Vice President indicated that the policies of the NPP government such as Free SHS, PFJ, 1D1F, 1V1D, among others has transform the country.

“ we have done about 42 infrastructure projects completed , 57 ongoing and 13 inherited projects from the NDC has been completed in the yendi municipality.”

He said government will provide students loan to students who will complete Free SHS and will not be able to pay their university fees to able them get access to tertiary education.

“Due to the increasing population of students from the Senior High Schools , Government intents to build a satellite University for Development Studies campus in Yendi and upgrade the Pong-Tamale veterinary college into a University of Agriculture to expand university placement in the Northern part of Ghana.

The King of Dagbon , Ndan Ya Na Abukari II, expresses his gratitude for the invaluable contribution of Dagbon Malti Naa I, President Nana Addo Dankwa Akufo-Addo for the enduring peace in Dagbon.

“ I wish to state categorically that the state of Dagbon is being affirmed with each passing day and is a factor of peace and stability in the country.”

The Ya Na commended the Akufo-Addo administration for the good work done so far to make life better for the people of Ghana.

The King of Dagbon however appealed to government to complete the Eastern corridor road project , the upgrade and expansion of the yendi hospital , yendi-Saboba road, and the yendi Chereponi road.

He advised government and opposition parties to refrain from provocative rhetoric and actions which has the potential of creating anarchy and disturb the peace and tranquility of the country.

“ I admonish the state security agencies to act professionally, without fear or favor to safeguard the existing peace in the country.”