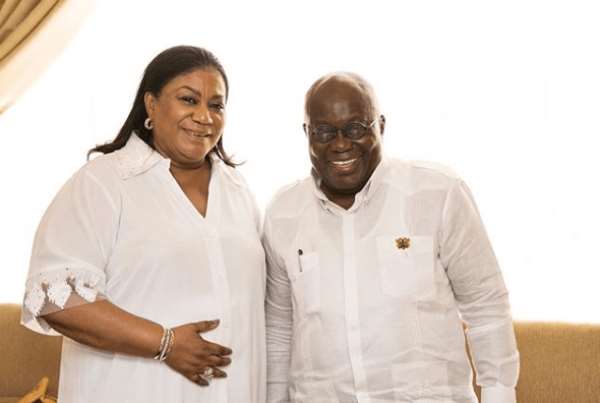 First Lady, Rebecca Akufo-Addo says another four-year term for the Akufo-Addo led administration and the New Patriotic Party (NPP) is what is needed to transform Ghana for the better.

For her, the unprecedented achievements of the NPP in the last four years are evident enough for the administration to be endorsed for its second term.

While speaking at the commissioning of a health post in Amasaman in Accra, the First Lady appealed to Ghanaians to renew the mandate of the current leadership for more progress.

“You have seen what Nana Akufo-Addo and the NPP are doing. You can see he is doing all the things he promised. That is why you have to vote for him again so he and the NPP can change Ghana for the better.”

Nana Akufo-Addo and his NPP administration say they have built a solid foundation which must be maintained and expanded after the 2020 election.

The President says Ghanaians are already eager to see the party get a second term in office .

Ahead of the general elections in December 2020, a number of the NPP bigwigs have said an extension of its mandate will be in the right direction because they have been able to improve the country's ailing economy in less than four years.

Mr. Peter Mac Manu, the 2020 Elections Campaign Manager for the NPP, is hopeful the party will win the upcoming December 7 Presidential and Parliamentary elections by a 1.5 million vote margin .

According to him, the performance of the Nana Akufo-Addo led government is unprecedented and visible in their respective locations and not in any “Green Book” for which reason Ghanaians will give the NPP four more years to do more.

He said the Akufo-Addo government had initiated the Planting For Food and Jobs programme, reduced inflation to 7.9% as at the end of 2019 from 17.5% in 2016, resolved “dumsor”, paid energy sector legacy debt and implemented free SHS programme with 1.2 million students currently benefiting. He said the free SHS programme had led to the enrollment rate going up by 62.6% and the addition of almost 1.5 million pupils to the school feeding programme.