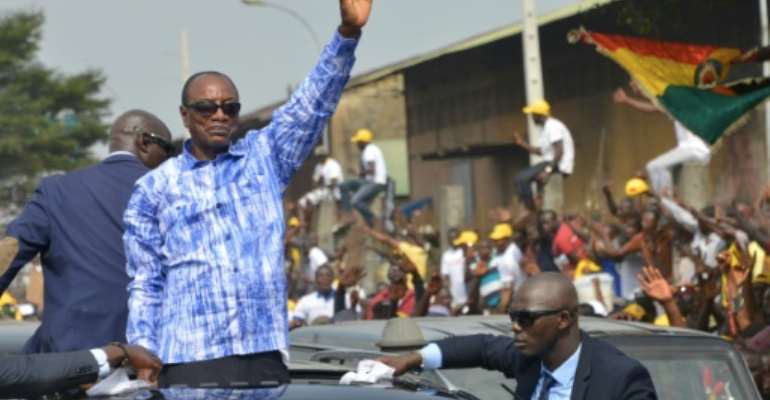 Guinea's President Alpha Conde had until now refused to spell out whether he would seek re-election. By CELLOU BINANI (AFP/File)

Guinean President Alpha Conde on Thursday filed his nomination papers for a controversial third term in elections next month, despite outrage and widespread protests in which dozens were killed.

Conde, nearing the end of his second and final five-year spell in office, this year pushed through a revamped constitution that opponents say was crafted to reset the term counter.

The 82-year-old walked from the presidential palace to the nearby Constitutional Court to file his nomination. He was accompanied by his wife, Hadja Djene Conde, and several ministers.

Conde "will be examined by a team of doctors who will confirm he is fit to lead the country for a few more years," a source in Conde's entourage said, speaking on condition of anonymity.

Conde had until now refused to spell out whether he would seek re-election, saying only that this was a question for his party, the Rally of the Guinean People (RPG).

Conde is the fourth candidate to file his nomination. The others are former ministers Ousmane Kaba, Abdoul Kabele Camara and Ousmane Dore.

Conde, a veteran opposition leader who has served long stints in prisons, only confirmed on Wednesday that he would seek another term.

The former French colony is replete in minerals but mired in poverty and instability and has suffered decades of autocratic rule.

But critics say he has become increasingly authoritarian, eroding human rights and using oppressive means to crush dissent, at the estimated cost of around 200 lives since coming to power.