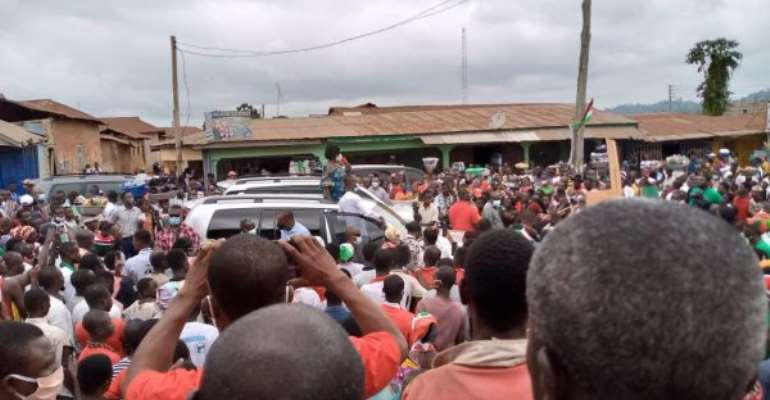 Professor Jane Naana Opoku-Agyemang, Vice Presidential candidate of the opposition National Democratic Congress (NDC) has assured the people of Western North Region that the next NDC government would complete all abandoned projects in the Region.

She said former President John Dramani Mahama, was not contesting for the Presidency again for his personal interest, but to complete and continue all projects and policies that were abandoned.

The Vice-Presidential candidate revealed that six E- blocks were sent to the now Western North Region when she was Education Minister, but all and other NDC initiated projects were abandoned.

This according to her, would compel the next NDC to introduce the "big push initiative" by investing about 10 million dollars into infrastructure Development to boost the infrastructure base of the country when voted into power.

Professor Opoku Agyemang said this when she addressed a community durbar at Sefwi- -Asawinso in the Waiwso constituency as part of her tour of the Western North Region.

She indicated that NDC did not discriminate against anyone and the next administration would ensure peace, unity and protection for all regardless of their political affiliation, religion or ethnic background.

She therefore called on Ghanaians especially women to vote for the NDC, since that was the only party to have brought development projects to the area.

She stressed that for the former President to settle on her as the Vice-Presidential candidate showed the latter had faith and confidence in women.

Nana Annor Kwerekye, Chief of Sefwi-Essakrom, who spoke on behalf of the traditional authorities said Asawinso "remains the strong hold of the NDC" and appealed to Professor Nana Opoku-Agyemang to consider creating a new district for Asawinso if the party wins the December polls.

She is expected to hold similar engagements at Asempaneye in the Juabeso constituency, Kwesiadukrom in the Bodi constituency, Akontombra,Aowin and Suaman Constituencies before rounding up her tour of the Western North Region.