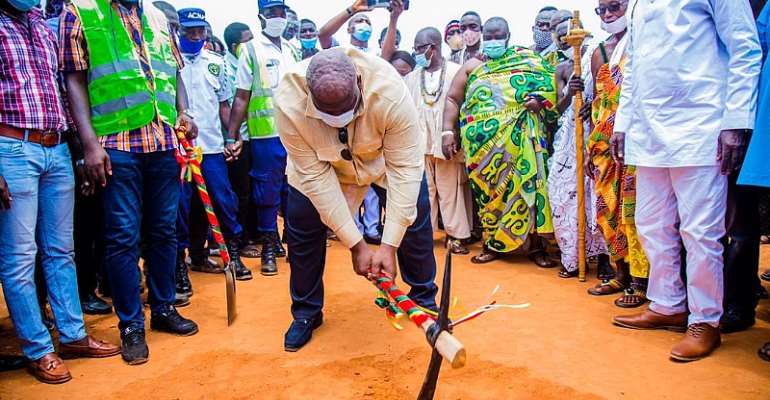 The Chief Executive Officer of Coastal Development Authority (CODA), Lawyer Jerry Ahmed Shaib on Tuesday 1st September, 2020 cut sod for the construction of a 12-Unit Classroom Block at the Kwame Nkrumah Cluster of Schools in the Ayawaso Central Constituency.

The project is being funded through the one million dollar one constituency program through the Infrastructure for Poverty Eradication Programme (IPEP) under the Ministry of Special Development Initiatives (MSDI).

The Municipal Chief Executive (MCE) of the Ayawaso Central Municipal Assembly, Alhaji Mohammed Quaye in his welcome address thanked the President of the Republic of Ghana, Nana Addo Dankwa Akufo-Addo for his continuous support for the people of Ghana. He explained that through the one million dollar one constituency initiative, the Ayawaso Central Constituency has benefited their share of the national cake. He also thanked the Chiefs and people for honouring the invitation and also expressed his satisfaction for their unending support towards all developmental projects within the municipality.

Addressing the chiefs and people of the Ayawaso Constituency, the CEO of CODA, Lawyer Jerry Ahmed Shaib said the President in 2016 promised Ghanaians that when he is voted into office he will allocate one million dollar per constituency to help in socio-economic development in every constituency in the country. According to him the President has fulfilled his promise by bringing development to the doorstep of the people.

He explained that during stakeholders’ engagements with the people of Ayawaso Central Constituency, they requested for several developmental projects including an astroturf and a 12-unit classroom block at the Kwame Nkrumah Cluster of Schools. He said the contractor has gone through the procurement processes and have been awarded the contract to construct the 12-unit classroom block for the people of Ayawaso Central Constituency.

He also assured the gathering that the contractor has been directed to ensure that artisans that would be needed in the construction work should be employed from the Ayawaso Constituency to enable the youth get employment through the project. He used the opportunity to advise the youth to make sure that when they are given that opportunity to work, they should ensure that they work diligently and with integrity.

He finally assured the people that the duration for the construction is going to be six (6) months and hopes that the contractor finishes ahead of the scheduled time. He prayed that the chiefs and people will support the contractor to enable the project complete successfully.

The Member of Parliament and Deputy Minister for National Security, Honourable Henry Quartey thanked the President for this initiative and other social interventions he has extended to Ghanaians. According to him, apart from the asphalting of over 20 kilometers road that has been completed another 20 kilometers would be done before the end of the year.

He further said that the astroturf project at Alajo has commenced and after its completion it will help in unearthing football and other sports talents among the youth of Ayawaso Central. He also said an existing office block for the Municipal Assembly is being converted into a Children’s Hospital under the one million dollar one constituency programme.

He also used the opportunity to appeal to the people of Ayawaso to ensure that they keep to the safety protocols since we are not in normal times and the COVID-19 is still in the system. He advised that the people should make sure they wash their hands, use the hand sanitizers and also wear their facemasks at all times. He also thanked the CODA for donating two thousand (2000) pieces of facemask which would be distributed to the people of Ayawaso Central Constituency after the programme.

He finally thanked the chiefs and people for their support and prayed that they will ensure that they will keep supporting the good works in order to bring development to people. He also thanked the media for their collaboration and advised them to be circumspect with their reportage since this year is an election year.

Furnish us with Ejura committee’s report – Families of kille...
20 minutes ago