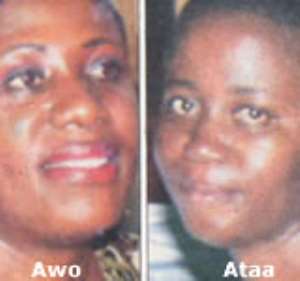 Four and a half months after what has become known as the Dansoman Shooting Incident, in which all four occupants of a taxi cab were cold bloodedly gunned down by trigger- happy police officers, at least two of the perpetrators have been identified.

But the most emotional spectacle came up during the final stages of investigations into the shooting incident as police officers were allowed to search their souls, after confession. A number of them openly broke down and wept profusely for several minutes.

Pleading with the bereaved families for forgiveness, Police Constable (P/C2) Godfred Kwasi Kumaku told the Justice Amoono Monney Committee sitting at the Ministry of Interior on Tuesday September 5, 2006 that he fired all five rounds of ammunition in his AK 47 into the Tico taxicab with the registration number GR2995X, on Friday, April 21, 2006, even though he was aiming at the front tyre.

The hearing, set up by the Minister of Interior, Albert Kan Dapaah, was tasked to find out what really happened on that tragic early morning at Dansoman.

The Committee Sitting had so been held on the blind side of journalists, who had been keenly following the Justice Georgina Wood Committee probing allegations of missing cocaine and corruption of investigators. The Justice Amoono Monney Committee has since rounded up sittings.

The tearful NCO, in his mid-twenties, at 1.55 pm last Tuesday knelt before family spokespersons for Lydia Opoku, 41 (a.k.a Awo), Atta Boatemaa, both traders, and begged for forgiveness.

This was after the committee granted him permission to do so, as he had earlier requested.

He confessed also that he lied in the earlier statement he had written on the incident to the effect that two of the occupants got down from the fast moving Tico taxi cab and opened fire on them (the police).

Looking remorseful, and on his knees, Kumaku with service number 36239, spilled all the beans at the sitting when he revealed that he was not the only person who shot at the car.

“After I had shot at the car, I heard another shot from our car, but I could not tell the direction from which it was fired because my head was outside as I aimed at the Tico taxi in front of us,” he said tearfully.

The younger officer, with four years' experience in the service, said ever since he passed out from training on January 31, 2002, the first time he fired a bullet was the dawn the incident on Friday April 21, 2006 in which Awo, Attah and the other two male occupants were killed.

He named his colleagues during that operation as Edward Adjei, Edmund Djan and Eric Akidi, the group leader. None of the others admitted firing any shot even though they could not account for all the bullets they had signed for.

Kumaku stated that he and his colleagues protected the car and made sure no member of the public had access to it until it was towed away by the Homicide Department of the Criminal Investigations Department of the Ghana Police Service.

However none of the officers of the operation could account for the money said to be both in local and foreign currencies, running into hundreds of millions of cedis that the ladies, then on a business trip to Togo, were carrying in the car.

The money was said to have been strapped to Awo, in a belly band.