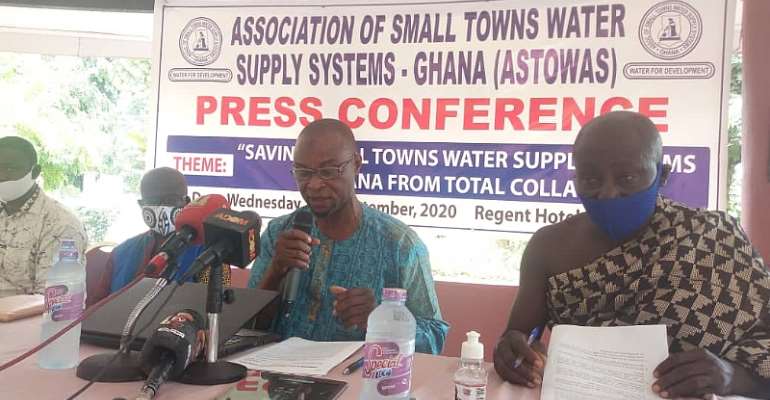 Members of the Association of Small Towns Water Supply Systems – Ghana are appealing to the government to take immediate steps to fully pay them for the water they have supplied to the public since April this year.

According to them, the government has so far paid about 30% of the bill for the month of April while the balance remains unpaid.

“Out of Gh.c 424, 440.69 water bill presented for April, only Gh.c 124, 809.85 was released by the government to us and even that, it was paid in August”, Issah M. Ahmed, Secretary of the Association disclosed at a media encounter in Sunyani last Wednesday.

While thanking the government for payments made so far, the association is appealing for the early release of the outstanding amounts for the remaining months to enable continue serving consumers in the wake of COVID-19.

In March this year, the government announced the supply of water to the public for free as part of measures to mitigate the impact of COVID-19 on people.

The Associations of Small Towns Water supply Systems – Ghana, which has been in existence since 2005, is responsible for the supply of potable water to several towns and communities, in almost every region of Ghana.

At the Press Conference in Sunyani, the Association expressed grave concern about the imminent grounding of their work due to the inability to meet operational costs and reiterated the urgent need for the government to pay their arrears for April and the rest of the months since the free water assistance programme was introduced.

They are particularly worried about the difficulty in footing the electricity bills since all their plants use pre-paid meters and further called on the government to help change all their meters to post-pay ones to ease the monetary pressure on small towns’ water systems.

“We are equal partners in the rural water sector and expect the government to recognize the selfless contributions we are making to the rural communities and accord us with the respect we deserve”, Mr. Ahmed added.

The National President of the Association Hamza Zakaria noted that the various small-town water systems are finding it extremely difficult to continue with their operations due the delay in the payment of the bills by the government and called for the Ministry of Sanitation and Water Resources to help facilitate the early payment of the bills to save the systems.