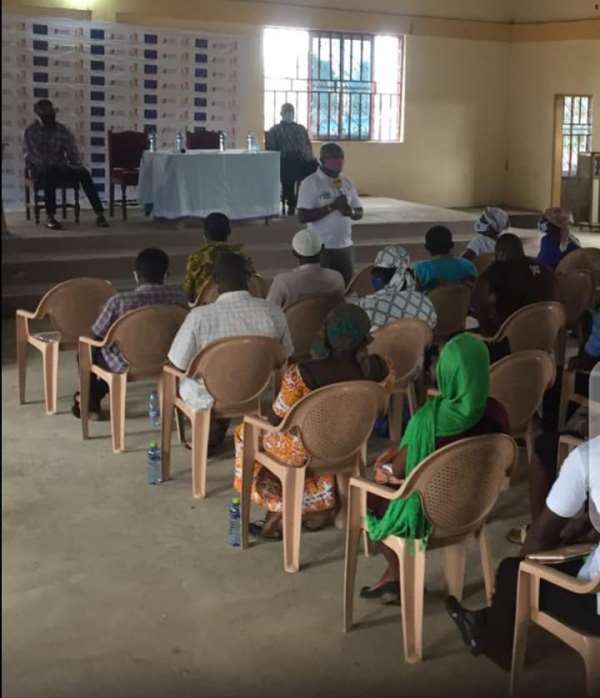 The Ga South Directorate of the National Commission for Civic Education (NCCE) has organized a social auditing programme in the Domeabra Electoral Area within the Domeabra Obom Constituency on Thursday 27th August, 2020 at the Divine Healer’s Church.

The objective of the programme is to promote community ownership of developmental projects and policies, increase awareness of the operations of the local government and empower the citizenry to demand accountability from duty bearers as they do their part as well.

The programme is part of the Accountability, Rule of Law and Anti-Corruption Programme (ARAP) which integrates National Anti-Corruption Action Plan (NACAP) in its design.

Speaking to the people, the Municipal Director of NCCE George Obeng Osei made it known to the people not to always wait on the assembly or the government for everything to be done in their communities.

He urges them to initiate some projects themselves and call in for support from the assembly. He said as they pay their taxes directly and indirectly, they should also be concerned about what their monies are been used for. "If they don’t understand anything, they can contact the specific department at the assembly for the necessary response than to assume and sit in despair."

According to him, at Domeabra electoral area, the top issue was to get portable water against other issues. Fortunately, there was an ongoing solar borehole project in the community which many community members were unaware of. A five (5) member committee has been formed to liaise with the assembly member and unit committee members to see to it that the water project is carried out to the latter for the community members to see water flow in the end and be ready to assist in the maintenance and protection of the facility.

Present at the programme was the Municipal Director for the Commission on Human Rights and Administrative Justice (CHRAJ) Mr Frank Owusu and the Assistant Director for the Domeabra Zonal Council, Mr George Marfo. Others present were some members of the unit committee, opinion leaders and the residents in general. Mr Frank Owusu took his turn to also talk about corruption in various forms and how we as citizens have to change our mindset to reduce the act in all spheres of life.

The programme ended with acknowledgement to the European Union (EU) for their support and a visit to the solar borehole water project site for the people to see for themselves.