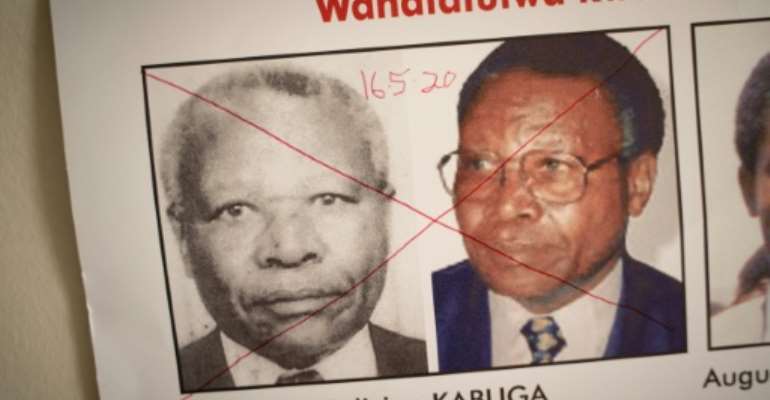 The date of arrest and a red cross are written on the face of Felicien Kabuga, one of the last key suspects in the 1994 Rwandan genocide, on a wanted poster at the Genocide Fugitive Tracking Unit office in Kigali. By Simon Wohlfahrt (AFP)

The lead prosecutor in the trial of alleged genocide financier Felicien Kabuga said Thursday his team is on a fact-finding mission in Rwanda to seek fresh evidence to bolster their case in an international court.

Serge Brammertz, the chief prosecutor for the international tribunal handling the 1994 genocide trials, is leading an on-the-ground investigation to update the case against Kabuga, described upon his arrest as Africa's most wanted man.

Kabuga, who is 84 according to officials, but claims to be 87, was arrested in May at his home outside Paris after 25 years on the run.

He is accused of financing the genocide that saw Hutu extremists massacre some 800,000 Tutsis and also moderate Hutus.

A French court ruled in June that Kabuga should stand trial at the UN Mechanism for International Criminal Tribunals (MICT) based in Arusha, Tanzania, but his lawyers have appealed.

Brammertz -- a Belgian magistrate and lead prosecutor of the MICT, which took over when a prior international tribunal for Rwanda ended in 2015 -- says his team in Rwanda is leaving no stone unturned as they seek a guilty verdict.

Brammertz, pictured in 2016 when he was chief prosecutor at the International Criminal Tribunal for the former Yugoslavia. By Jan HENNOP (AFP)

"We are working hard to update the file in order to obtain a conviction at the end of the trial," the prosecutor told AFP in Kigali on Thursday.

The evidence used to obtain an arrest warrant for Kabuga -- who was indicted by a previous tribunal in 1997 on seven counts, including genocide -- was "very old" and needed updating, Brammertz said.

His recently-expanded team is seeking access to key Rwandan files on Kabuga's case and firsthand sources during their month-long research mission to bolster the dossier against him, Brammertz added.

"We must therefore go back to the witnesses of the time, see who is still available," he said.

"We're obviously taking advantage of this to look for new evidence," he added, saying no aspect of the indictment against Kabuga had been ruled out as yet.

A sketch of Felicien Kabuga wearing an anti-coronavirus mask when he appeared at the Paris Court of Appeal on May 20. By Benoit PEYRUCQ (AFP/File)

The team arrived in Kigali on August 25.

The Cour de Cassation, France's supreme court for criminal cases, is expected to rule on September 30 whether Kabuga should be transferred to Tanzania to stand trial.

His lawyers say a UN court in Africa would be biased against their client, who they also say is in poor health, and want him tried in France.

Brammertz said he was confident the court would approve his trial at the MICT.

Kabuga, once one of Rwanda's richest men, was indicted by the tribunal in 1997 on seven counts, including genocide. He denies all the charges.

He is alleged to have funnelled money to militia groups as chairman of the national defence fund.

Kabuga is also accused of setting up the Interahamwe militia that carried out massacres and the Radio-Television Libre des Mille Collines, which incited people to murder.

The US State Department hailed the arrest as "a milestone for international justice, and a message to all fugitives indicted for genocide that they will be brought to justice."