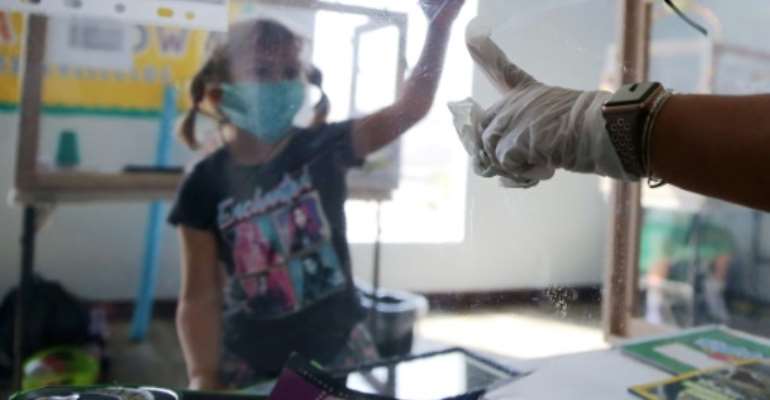 A student at a socially distanced protective desk in California, one of the US states hit hardest by the coronavirus. By MARIO TAMA (GETTY IMAGES NORTH AMERICA/AFP/File)

The US has urged states to get ready for a potential Covid-19 vaccine rollout two days before the presidential election, it emerged Wednesday, as France prepared to present a mammoth spending plan for its virus-hit economy.

Across the world, governments are hoping to announce a vaccine as soon as possible to reopen economies shuttered to contain an illness that has killed more than 850,000 people and infected over 25 million.

In a widely circulated letter, the US Centers for Disease Control and Prevention asked states to sweep away red tape that could prevent a network of vaccine distribution centers being "fully operational by Nov. 1, 2020."

That is two days before voters head to the polls in an election clouded by the virus and the economic crisis it provoked, sparking concerns President Donald Trump's administration is rushing to have a vaccine before November 3.

"The normal time required to obtain... permits presents a significant barrier to the success of this urgent public health program," CDC head Robert Redfield told states in the August 27 letter.

"CDC urgently requests your assistance in expediting applications for these distribution facilities."

Priority will be given to essential workers, national security officials, seniors and members of vulnerable racial and ethnic groups, according to The New York Times.

AstraZeneca is partnering with Oxford University in England while Moderna is collaborating with the US National Institutes of Health. Pfizer and BioNTech are partnering on the third candidate.

Under normal procedures, test administrators must wait -- probably for months -- to verify that vaccine candidates work and are safe.

The US Food and Drug Administration however has raised the possibility that a vaccine might be given emergency authorization before the end of trials.

FDA Commissioner Stephen Hahn has denied he is acting under pressure from President Donald Trump. By KEVIN DIETSCH (POOL/AFP/File)

The FDA has faced mounting criticism from the medical community that it is bowing to political pressure from Trump, who is behind Democratic challenger Joe Biden in the polls and has said one might be ready before the election.

"This means mass vaccination nationwide could start in 59 days. FIFTY-NINE DAYS. Is any #COVID19 #vaccine likely to have completed Phase 3 safety and efficacy clinical trials, and gone through full scientific and @US_FDA review in 59 days?" award-winning epidemiology writer Laurie Garrett asked on Twitter.

"To my knowledge, none of the US #COVID19 #vaccines have finished even enrolling test subjects for Phase 3 trials. Rushing this to completion within 59 days is DANGEROUS."

FDA chief Stephen Hahn, however, has denied he is acting under pressure from Trump, arguing that any vaccine approval would be a "science, medicine, data decision."

The US has registered more than six million Covid-19 cases -- almost a quarter of the global total -- and 185,000 deaths.

Shutdowns have taken a toll on livelihoods across the globe as business revenues plunge and millions are forced out of work.

In Europe, where GDP plunged 12.1 percent in the three months to June, fears are growing of more lockdowns and disruption this autumn and winter as the virus resurges.

The French economy has been pushed into its worst downward spiral since 1945, with GDP down 13.8 percent in the second quarter, after a drop of more than five percent in the first.

Paris, hoping to ward off the threat of mass layoffs, has earmarked 100 billion euros ($120 billion) to counter the devastating impact of the coronavirus.

Some critics say the money may come too late to save many companies, while others say high hopes for President Emmanuel Macron's green revolution in the French economy are likely to be dashed.

Graphic on a nasal swab-test that can quickly check for the presence of the SARS-CoV-2.. By John SAEKI (AFP)

Economists have welcomed the departure from the kind of austerity measures seen after the 2008 crisis which were "a huge error," said Philippe Martin, who heads up the CAE think tank, which advises the government.

Unlike the post-2008 crisis response, much of the new plan targets the supply and investment side of the economy, namely businesses.

The measures over the next two years include 10 billion euros' worth of corporate tax cuts.

Youth employment is also a major target of the spending, with 6.5 billion euros aimed at encouraging hiring for millions of new entrants on a depressed job market.

In Australia, the government announced a record contraction of seven percent despite authorities providing billions of dollars in support to struggling firms.

New Delhi reported that growth suffered a historic 23.9 percent decline in the second quarter, while Brazil's economy contracted by a record 9.7 percent.

And to add insult to injury for the sports-mad South American nation, football icon Neymar was one of three Paris Saint-Germain stars to have contracted the coronavirus, a well-placed source told AFP.

"Three Paris Saint-Germain players have confirmed positive Sars CoV2 tests and are subject to the appropriate health protocol," PSG said in a statement.

When contacted by AFP, the club declined to confirm the identity of the players in question.

The virus failed to put the brakes on the Venice film festival in Italy, which opened Wednesday with a tribute to those who lost their lives from coronavirus.

The festival, rolling out on the glitzy beachfront Lido through September 12, is the first major international festival to take place since Covid-19 shuttered theaters, halted production and drove millions of moviegoers around the world to their television sets.