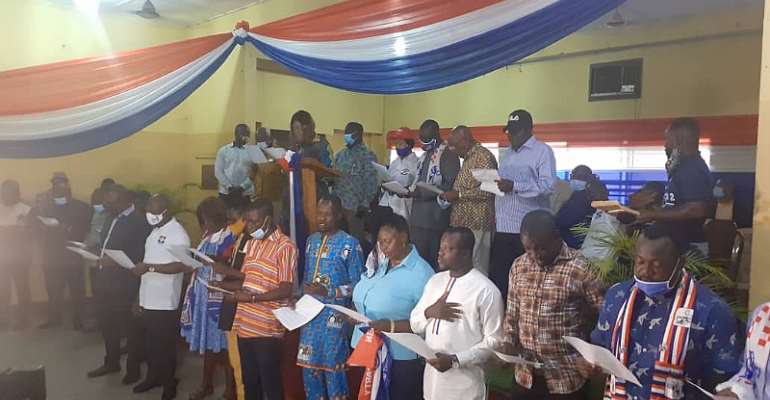 The Klottey Korle constituency branch of the New Patriotic Party (NPP) has inaugurated its campaign team members in Accra on Tuesday, with an aim to win the Parliamentary seat in the constituency for the party in the December 7, polls.

Mr Kwabena Abankwah-Yeboah, National Treasurer of the New Patriotic Party present at the inauguration, took the opportunity as a member of the Advisory Council of the Klottey Korle Constituency campaign team to advice members, Electoral Area Coordinators and Polling stations executives.

He charged them to diligently work hard in order to win the seat for Party and also ensure victory 2020 for His Excellency Nana Addo Dankwah Akufo- Addo, President of Ghana.

Mr Odarlai Parker, Greater Accra Regional Secretary of the New Patriotic Party (NPP) highlighted that the Party’s victory in the upcoming 2020 elections would be meaningless unless it is able to capture Parliamentary seats in Constituencies including as Klottey Korle.

This, he indicated was because the party has not been able to win that seat since it lost to the National Democratic Congress (NDC) 12 years ago.

Mr Parker urged the Constituency Executives and polling agents to work hard to ensure what he described as a double victory for the Party in the December polls.

He called for unity among the executives to play a pivotal role in campaigning massively for the Parliamentary candidate Mr Prince Appiah Debrah to be the Member of Parliament for the Klottey Korley constituency.

The inaugurated executives pledged their allegiance to the party and promised to work indefatigably to win the seat for the parliamentary candidate.

Mr Appiah Debrah expressed gratitude to all patriotic members of the party and promised to deliver his best when given the mandate to be the Member of Parliament for Klottey Korle.

Gov’t in the process of buying bigger presidential jet – Eug...
6 minutes ago