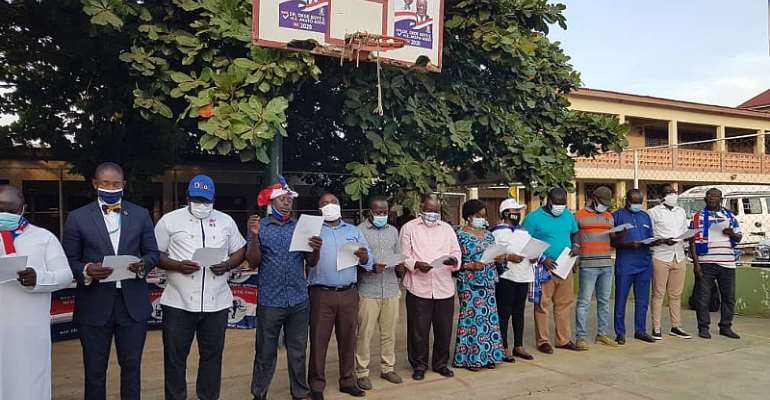 The New Patriotic Party in Ledzokuku constituency in Greater Accra Region has inaugurated a 29-member campaign team to help re-elect the Member of Parliament for the area Dr. Benard Okoe Boye and President Nana Addo on December 7th

Addressing the press, Hon. Dr. Okoe Boye, indicated clearly that, "we have a duty to work hard because the president has done a lot of projects in this Constituency, so all that is left for them is to work hard to get the majority of votes for both parliamentary and presidential candidates."

He noted that most of the members of the campaign team are individuals that are known to them, hard-working individuals, so they have confidence in them and believed strongly that by the grace of God they will win the election.

Dr. Oko Boye went on to advise everyone to adhere strictly to the COVID-19 protocols.

Hon. Dr. Okoe Boye stated that The president has justified an extension of his tenure by his works.

Some of the projects brought to the constituency and the country at large by the NPP government include Lekma road, Teshie London Beach, Valco, University of Ghana Sports stadium, power supply, free Senior High School among others.

He entreated everyone to support the president for him to do more for Ghana.

Hon. Evelyn Naa Adjeley Twum-Gyamarah, the MCE, Ledzokuku, who was very optimistic that NPP shall win both the presidential and parliamentary elections in Ledzokuku Constituency come December 7, urged the team to be devoted and work harder towards the party's victory.

"The road to this victory will not be easy, and will urge everyone to work harder and be committed during their house to house, door to door and road to road campaign".

Adding that unity and a little bit of sacrifice from everyone will help the party achieve its ultimate goal.

She further added that "they have a good parliamentary candidate in the person of Hon. Dr. Okoe Boye who has done extremely well in the parliament as a legislature, and in the executive arm of government as a Deputy Minister of health, and he also lobbied for so many jobs and projects in Teshie and projects like ultra-modern sports complex that will be commissioned hopefully next month at Tsuibleoo Star Park definitely deserve a second term".

Hon. Evelyn Naa Adjeley Twum-Gyamarah, went on to laud the president and the vice for their massive work done and asked the constituents to vote massively for NPP come December 7.

She noted that "in unity lies the strength and in unity, victory shall be ours, for the battle is the Lord's".